About a week ago, I went to see Fertile Ground at the Oakland Museum. It’s an interesting show, although one largely outside my wheelhouse.

There’s some neat f/64 material, and a small but spot-on section about CSFA and the boom in post-war, GI Bill-fueled college enrollment. This includes material on Ansel Adams and Minor White at CSFA, an important inroad of photography into academic art instruction. My favorite part was this magazine article by White: 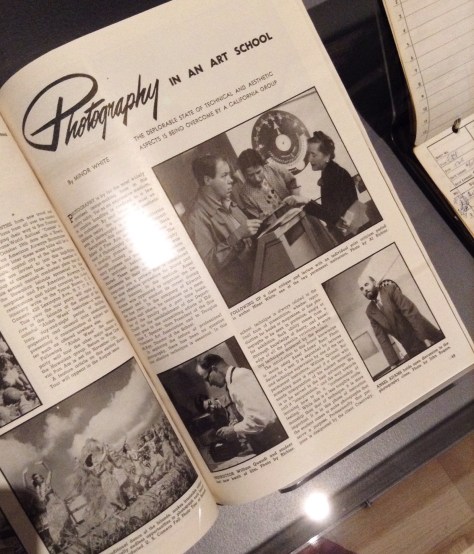 I can’t help reading it in the style of the Berkeley Farms “Farms….in Berkeley? (mooooooo)” slogan.

While I’m not particularly fluent in media other than photography, there was some stuff there I loved1. My favorite thing, though, is that around the corner from this gigantic map of the relationships in the “Mission Scene”:

Map of Relationships in the Mission Scene room

…tucked away in a fire exit, nearly out of sight, was a handful of printed ephemera decrying yuppie incursion into the Mission. 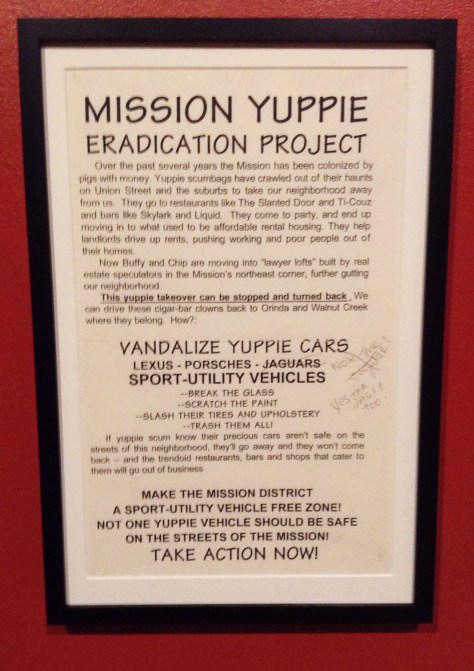 This utterly charming but carefully peripheral display was more or less the only nod to the existence of gentrification in a room about artists working in a neighborhood which is practically synonymous with the problem of gentrification and class resentment. Note also that by using dated, anonymous ephemera, the curators are framing the issue as one that is implicitly quaint and not relevant to the intentions of any particular artist.

This is in contrast to the substantial engagement with social issues in the room devoted to work of the 30’s, which deals both with the important issues of the day, and the ways in which artists’ political views influenced their relationships, their work, and their visibility.

This attention to the sociopolitical diminishes in the CSFA room, and is almost absent in the UC Davis and Mission Scene2 rooms. The message seems to be that engagement with political realities is part of the past of California art—albeit a treasured part—and that while art continues to brave and challenging, the challenge it presents is no longer to the world, but just to itself.