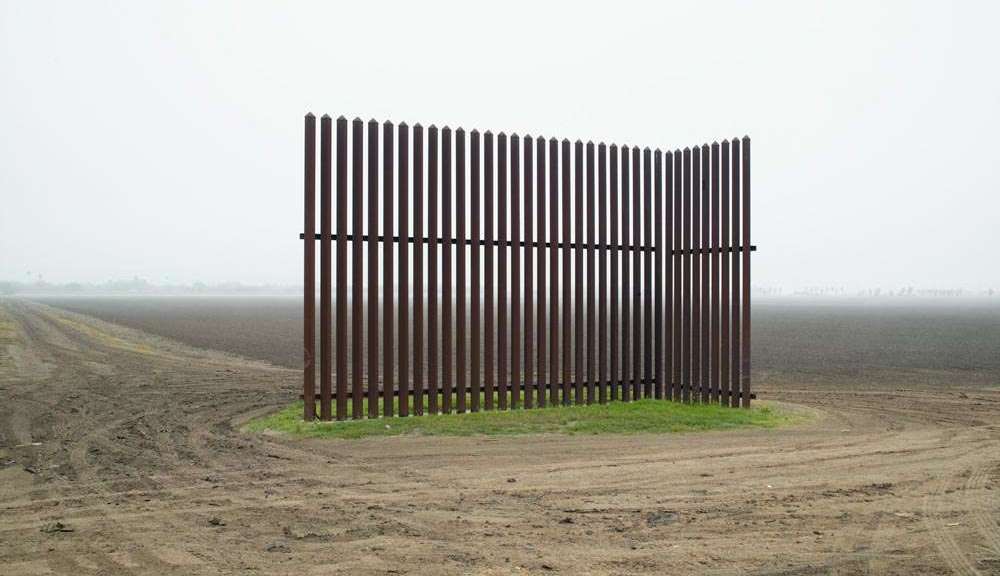 In the American West, the open road is one of those enduring, unavoidable photographic tropes. While Dorothea Lange and Robert Frank are the iconic images, I’ve always seen the photos as part of the larger theme of photographing technological expansion into the West. So photos of train construction like those by Russell* are also part of the same narrative. It’s a seductive image which captures much of the myth of The West. A technology’s-eye view full of possibilities. Places to go. Things to build. Landscape to tame. The freedom to become whatever you want to be.

*My post on Russell’s Great West Illustrated covers more of this but Carleton Watkins has some train photos too. It’s also worth looking at Marc Ruwedel’s Westward the Course of Empire here, in particular photos like this one.

I suspect that everyone in The West takes at least one photo of the big sky, unending road, and undeveloped landscapes stretching as far as the eye can see. I know I have.

That Richard Misrach’s Border Cantos is able to reference and draw on this trope while conveying the exact opposite idea is my favorite part of his show in San José. In his images we have all the myths of The West except that everything is literally turned on its side. Instead of traveling along the road and into the frame, we know that the migration direction is side to side across the frame. On foot. The road is no longer an invitation, it’s a barrier. The landscape is no longer wide-open, it’s partitioned.

This west is now explicitly about preventing travel. And it’s about traveling despite the barriers.

The wall and border cuts through without regard for the terrain or landscape—whether natural or manmade. It’s a straight line on the map which creates an artificial imposition on real life.* It slices through mountains and deserts with gaps which are large enough to allow animals but not humans or automobiles to cross.** It divides cities—we see photos of the wall crossing streets, parks, backyards, and farmland—into two with the singular purpose of keeping people, and only people, stuck on one side. It’s a visual demonstration of the absurdity of borders and what it means to say that “the border crossed us.” The land predates the border. Cities and settlements predate the border. Mexican people and their migrations predate the border.

*I prefer the concept of geography-based borders but those, as the case of Chamizal shows, can be at least as absurd due to the fact that natural features change over time.

**The wall itself also reminds me of Christo and Jeane Claude’s Running Fence except that where the Running Fence used the landscape, the border wall is imposed upon it.

The wall is indeed absurd. Just looking at it reveals how futile the idea of making it impenetrable is. There are gaps. There have to be gaps. Sometimes the gaps are wider than the segments of wall. The frontage road gets dragged daily so that footprints show up. Migrants wear carpet over their shoes to hide their footprints. The territory it covers is so immense that the task of securing it is sisyphean. There’s no way to do it. To claim otherwise is irresponsible.

It’s a bit of a shame that there’s no equivalent photographic trope regarding fences in The West. While the myth and appeal of The West is the promise of possibility, one enduring aspect has been the struggle over land usage.* Fences have been at the heart of that for over a century. Where the fence-cutting wars signified the beginning of the end of the open range and the increased conflict between Anglo and Mexican-American conceptions of land-use, the border fence is the newest incarnation of that conflict.

What a lot of the land-use discussion misses though is that it’s not just about how we’re using the land, it’s about who gets to use it. Which brings us to the other part of the exhibition. It’s not just about photos of the border. It’s about the migrants, the things they drop, and the small marks which they leave on the land.

This part reminds me of Marc Ruwedel but there’s room here for multiple artists. The border may be the most-visible voice in this series, but the traces that the migrants leave are just as important. The border acts upon the landscape and the migrants. What the migrants leave behind is more passive, but still speaks to their will about making the crossing and how while they want to use the land for the same mythical hopes and dreams that The West has always promised, their very presence is in conflict with the way Anglos want to use the land now.

The artifacts—clothing, books, trash, etc.—are all things that simultaneously speak to where the migrants come from and where they’re going. After he photographed them, Misrach sent them to Guillermo Galindo as part of a companion project to the photographs. Galindo’s project transforms the artifacts into musical instruments which, in-concert with the photographs, gives them life by providing them a voice.

There are short videos featuring many of the instruments on bordercantos.com but listening to the full composition in the gallery is a completely different experience. I was struck by how close converting the artifacts to instruments cam to merely being a gimmick. But it’s not. It’s wonderful.

The music is totally gente both in terms of its sense of sound/musical memory as well as how well it embraces the ethos that everything can be repurposed. It also works wonderfully as an aural context for all of the photographs. The border and The West has a long history of humans leaving their mark as they pass through. Photography is a way to capture these traces visually. Music and sound engages another sense and takes the entire exhibition to another level.