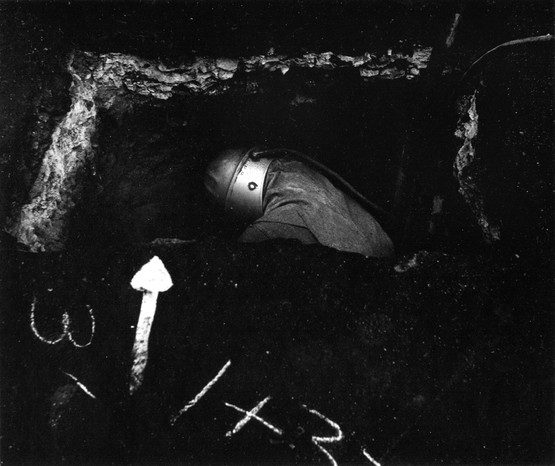 This post follows “Minor White: Authenticity, and Reverie.”; It doesn’t bear directly on the Soth post, so I’ve kept it separate.

It’s commonplace to refer to Minor White as a “zen” photographer. In fact, hearing this in Jeff Curto’s excellent History of Photography podcast is what initially spurred my interest in White. I’m happy it did, because I’ve found White’s photography and writing to be consistently fascinating (even if not always coherent). But I don’t actually think “Zen” is all that accurate or helpful as a label for White.

White did have a long-time interest in Zen; he talked and wrote a lot about it, and he inspired students to pursue it—but for White, Zen was only part of a larger religious pursuit, and as far as I can tell, not the most important part.[1]

In religious disposition, White was a devotional mystic, always oriented toward a hermetic, numinous reality—whether in western (Catholic), eastern, or other terms. His perspective, tone, and goals seem to me less in line with Zen than with Christian mysticism, Sufism or Bhakti. This is reflected in his photography’s deep concern for insides and outsides, essences, intuitions of ultimate reality, private experience, and the ecstasy of commun(icat)ion through art. There’s a ton of hot I on Thou action throughout White’s work.

More than anything, Minor White was new age. He read and worshipped widely and syncretically, with little regard for historical or doctrinal distinctions. And when he settled his spiritual course, it was not on Zen but on the somewhat culty Gurdjieff, whose philosophy in broad strokes seems to resemble the worst of gnosticism.[2]

Yet much more is read into White’s “Zen”-ness than into his Catholic-ness, or his Gurdjieff-ness, or even his homosexuality.[3] This is…well, suspect, and I think it can create incorrect expectations for viewers. If you’re sent to either White’s photography or his writing looking for a coherent and unitary body of work informed by or articulating a Zen philosophy,you’ve been set up for disappointment.

“Zen” as evasion and rehabilitation

So, why is White identified as Zen? I think for some folks, it’s a convenient way to avoid digging into what his real spirituality was, and where it took him in his photography and in his role as a teacher and an editor.

They exploit “Zen”’s use in American vernacular as an adjective which the speaker is excused from having to mean anything by. It’s a sort of verbal shrug with a whiff of incense attached. It’s an easy way to flag a subject as being in some way exotic, inscrutable, or mysterious, without having to account for how or why it is those things. It’s lazy.

But I think it is also sometimes used to rehabilitate White’s philosophical eccentricities. “Zen” may get a pass in circles where other influences which were more profound on White would not.

It’s hard to blame them. A lot of White’s writing reads like the dialogue of a sitcom cultist. In internet terms—well, not as crazy as the Time Cube guy, but a good bit crazier than the Friesian guy. It’s not merely wrong or dated—how does one even attempt to parse statements like “The quantum jump from confrontation to circumnambulation is the secret of the Golden Flower”?[4]

What are we supposed to do with that utterance? Well, apparently we’re supposed to hang the “Zen” label on it like a “do not disturb” sign for ideas.

Something similar sometimes happens with images, I think. For example, take Octave of Prayer, one of the exhibitions/books White edited. (Octave is particularly relevant because it deals specifically with photographic expressions of religious experience.)

If you compare the full text of Octave of Prayer with the excerpt Peter Bunnell included in Aperture Anthology: The Minor White Years, you’ll find a marked difference. Bunnell did not only attempt to cherrypick the best images; he produced an outright unrepresentative edit, avoiding the edgy and weird imagery which occupies a central place in White’s sequence. The result is an edit that fits a much more enduring taste, and it’s hard not to prefer it. But isn’t it a bit of a problem to do that to a sequence, especially one edited by White, for whom the sequence rather than the individual photo is the significant unit of the medium?

New Age as appropriation and reinvention

Part of what’s so odd and off-putting about Octave is its strange systematicity. In order to write an essay on the relationship of photography to spiritual contemplation, White apparently felt the need to generate an entire taxonomy of prayer, unhelpfully differentiated by superscript numerals, because of course one wouldn’t want to confuse Prayer5 with Prayer8. That would be crazy.

This system is not ornamental; he actually deploys it in detailed analysis, e.g.:

While we have insisted that images are ineffectual above the level of prayer3, special moments seem to occur when images appear to serve as catalysts for prayer6 or contemplation. These moments come when a third force “enters” a state of active meditation. A dozen years ago I proposed a canon for camerawork: “When the man reflects the subject and the subject reflects the man, Something might take over.” Now I can state that canon in more technical terms: WHEN TWO FORCES (original subject or its image and a person in meditation) ARE INTERACTING (coming together with a light degree of resonance, A THIRD FORCE MAY ENTER.

He goes on in this vein at length, paralleling another exhibition/publication from a couple of years earlier, Light7 (yes, “Light7”), in which White divided the word “light” into seven “levels” and “powers.” Why only 7? Well, White actually addresses this question…sort of:

The number seven makes us wonder if 7 is the highest. Well, no. 12 disciples, 12 Tribes of Israel, 12 signs of the Zodiac, and so it is better to say that there is always more. Seven reflects what we may expect of any medium at those rarefied moments when psychology, art, science, and religion overlap in one outward manifestation.

Of course it does.

This tendency actually runs throughout his Aperture work, I think. He labored under a strong impulse to invent, or reinvent, frameworks and categories—for photography, for art, for philosophy, for faith.

This reflects the characteristically new age sense that one is both obliged and empowered to reorder the world, to reinvent wheels, to refactor history and culture. It follows from the new age attitude to the past, which combines credulous reverence with a brazen entitlement to appropriate. Whatever seems true must be so; take it, disregarding its context and cultural specificity, and redeploy it wherever it seems to fit in one’s current predicament.

But really, one could as easily say it is the characteristically photographic sense that the artist seems to be always thrust into a moment of historical crisis where he must (re)invent the medium. The impulse to reference and appropriate is equally central to photography, as is the tense and tangled relationship with past and future.

And just as the new age and its precursors have insisted on rediscovering and inventing much the same set of insights constantly or cyclically since the nineteenth century[5], so photography has (in a similar time frame) insisted upon constantly inventing itself, upon seceding from art and from itself, and upon always being “dead” and being born.

This is—in either case—an epistemologically and historically problematic worldview, and its very perennialism makes it inherently self-dating.[6] And yet, it seems (in photography, at least) to have something to do with the liveliness of the medium.

Up to this point, I may have created the impression that Minor White is one of those artists whose work bears looking at but whose words do not bear reading with any seriousness. That’s not the case, however. There is a great deal in White’s writings that is worthwhile—but the trick is to locate the useful bits and and the real trick is to figure out whether and how to separate them from their context.

So, woven in between the most bonkers of White’s declarations, we find such beautiful, moving, and radical observations as this:

Considering the medium of camerawork, this exhibition is practically complete: some images are beautiful and thus art in both the profane and the religious sense, other images are symbolic and retrieve from storage hidden data in ourselves. Some images snap to the surface of the mind and can be talked about, others are “dark to the mind,” reach us intuitively and so are “radiant to the heart.” (Evelyn Underhill)….“Radiant to the heart” became the basic criterion for the selection of pictures for Octave of Prayer. As a criterion, “radiant to the heart” reduces the terrors of connoisseurship by removing evaluation from the head and putting it in the physical and psychic heart. This criterion makes the whole of photography available to cameraworker, viewer, and critic alike. When seen in depth, the radiant heart sees that all subjects are equally important. (Octave of Prayer, p. 26)

Camera lifts an image out of context—invariably. The photographer must put the image into his own context, or it remains alien to him. Any editor, in a search for binding affinities between images, takes images out of the photographers’ contexts (alien or earned makes little difference) and builds anew. The search for “the missing piece” without which no puzzle is complete, is the puppet strings by which his being a new context is given form. The editor must make the new sequence his own, or it will remain alien to him.

In all these shifting contexts who owns the image?—only photography itself, or mankind. (Light7, p. 71)

How delightful is White’s attempt at an editorial “criterion” which decenters intellectual analysis while explicitly encouraging critical judgment by all viewers? It gets at a problem of stratification which has increasingly plagued photography since the early 20th century, and has not eased off in the least since White’s death.[8]

Of course, it is questionable whether White really applied such a criterion[9], and it is telling that he dismissed Family of Man, which has arguably the best claim on doing so, as mere “schmaltz.”[10] But it was and remains a vital and necessary challenge, even if White himself did not meet it in Octave.

Similarly, White’s comments on sequence editing and image ownership in Light7 are insightful and as relevant to photography now as they were in White’s time.

And White’s writing is full of such useful material—and also full of total blather. So, one can hardly blame anyone for cherry-picking, or for producing sanitized and rehabilitated versions of Minor White for modern consumption. But it certainly does tend to produce a bit of culture shock for a reader first encountering the unfiltered original.

I’m not sure whether there is a “right” way to recontextualize the best of White’s writing. If there is, it would have to take into account all the many levels on which White operated, his capacity for deception of self and others, an awareness of White’s profound influence on the history of photography, and a world-class bullshit detector.

I know I’m not up to the task. The most useful resource I’ve encountered, which gives the best sense of White as a whole person, is Bunnell’s The Eye that Shapes, which is unfortunately out of print. If anyone has other suggestions, please let me know.

One thought on “Minor White’s Creed”