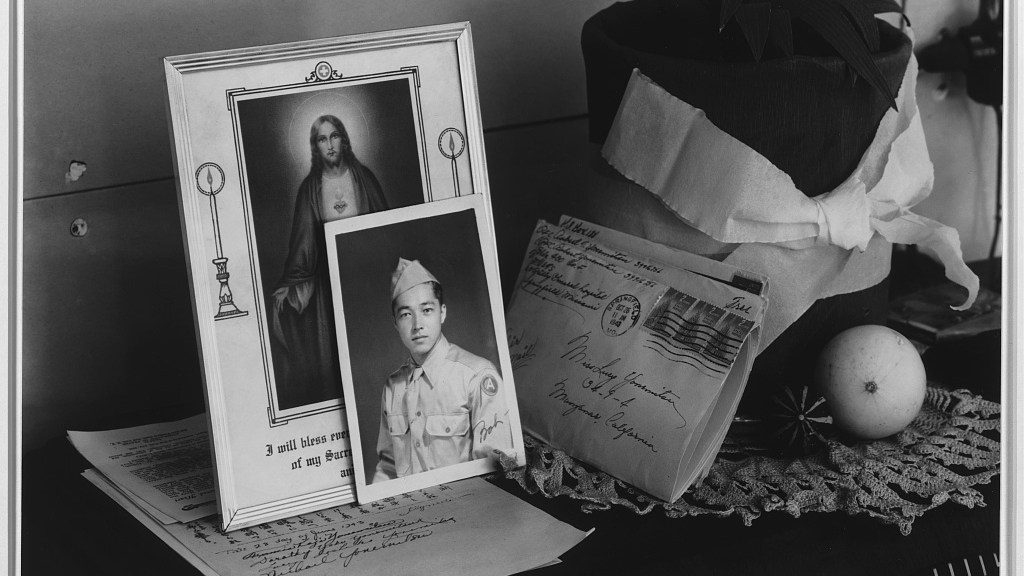 I’ve had a copy of Born Free and Equal* on my shelf for a while. I’ve flipped through it a few times but never really looked that closely, or read the essays, in it until recently. It took receiving a copy of Colors of Confinement** for Christmas to give me the push to actually look at Adams’s work and realize how distinct—in both weird and great ways—it is.

*I have this version of it which is very clear about not being associated with anything officially Ansel Adams branded. Given how the photos are in the public domain there’s probably some interest in comparing different printings too. It’s also interesting to see how the Library of Congress has digitized the collection by scanning both Adams’s prints and his negatives and presenting both versions as high-resolution downloads.

**Yes I’ll have a post on this coming eventually to.

Adams’s work was not part of the WRA and so isn’t government propaganda. At the same time, with its heroic headshots and optimistic assimilated future it feels incredibly propagandalike. There’s nothing here about hardship or injustice. None of the camp watchtowers or fences are pictured.* Everyone is identified as American. And all the activities depicted—baseball, scouting, marching band, home decor, toys, clothing, etc.—are “American.” The rare “unamerican” things—tofu preparation and buddhist rituals—are part of larger lists rather than highlighted images in their own right.

*While the texts says that Adams was not allowed to shoot the fences or watch towers, his photographs are not about confinement at all.

The portraits in particular are indeed heroic: full sun, tightly cropped, no context besides occupation. While we know that the subjects suffered hardships, they’re unbowed, optimistic, and looking forward to bigger and better things. The other photos are similar in tone and emphasize the working settlement and community which they have built in a tough landscape. The text accompanying the images expands on these themes by emphasizing loyalty, their post-internment relocation plans, and how they’ll become productive Americans.

I fully understand why this point of view was needed at the time. And why it got Adams into a bit of trouble when he exhibited these photographs in 1944. Still, the assimilationist view bugs me. Both in how it defines what it means to be an American and by extension, what it implies is non-American. While these photos aren’t about confinement, they are about a loss of culture.* To present as American, most of the Japaneseness has been scrubbed out of the photos.

*Which, given how big a deal Obon and other Nikkei Matsuri are still today, is distinctly not what happened.

At the same time, I can’t hate on these photos. Despite my issues with them, a large part of me is overjoyed to see Asian-Americans presented as simply, American. What makes these photos distinctly great is that it’s sadly jarring to see this view even today. Many people still do not expect “regular Americans” to be Asian. We need to see this representation more often.

Looking through the photos with today’s eyes and I also see some weirdness going on. Despite not being about confinement at all, because Adams published them at a larger scale under his name, they sort of became the most-likely collection of internment images for people to have seen. Internment is correctly remembered as one of the United States’ major mistakes in civil rights yet the images associated with it are these heroic ones which gloss over most of the abuses. I found myself wanting to look at some of the more critical photos as well. Thankfully, the book has essays which point in the correct direction.

Archie Miyatake’s essay about his father, Toyo, is especially informative. Toyo Miyatake became the official Manzanar camp photographer after smuggling in a lens and ground glass. At first he photographed on the sly with his home-made camera* and smuggled film and chemicals but eventually gained the acceptance of the camp director and photographed officially.

*This camera has become a symbol in its own right of the internment and internees willingness to fight the system.

I went looking for more of Miyatake’s photos of the camp. There are precious few of them online* but I was able to find copies of Two Views of Manzanar—a catalog from a 1978 show of Miyatake’s and Adams’s Manzanar photographs— and Elusive Truth: Four Photographers at Manzanar—a 2002 book** which features Miyatake, Adams, Clem Albers, and Dorothea Lange and frames the internment as something we need to remember in a post-September 11 world.*** There’s also a good, but long, series of posts by Nancy Matsumoto which covers all this ground and then some.

*Which is why there are none in this post.

**I can’t recommend it since some of the photos are printed horribly. Thankfully JARDA exists instead so I can find higher resolution versions of what’s in the book.

***There’s no need to discuss Adams’s photos again but it is worth noting that the subjects are identified by name instead of occupation in these two books.

Miyatake’s photos are interesting. Lots of posed documentary shots since that’s what he was supposed to be doing in the camp. But also a lot of images that Adams didn’t, or couldn’t show.  The watchtowers. Posing by the barbed wire fences. Kids lined up at the toy loan center. It’s very clear how this is strange confined world which is not acceptable.

There’s also a lot of the flip side to what Adams’s photos show. Where Adams photographed members of the 442nd as American heroes, Miyatake photographed their departure and their funerals and the way this impacted the community left behind—especially the Issei who Adams didn’t depict and who can’t be described as Americans because they weren’t allowed to become citizens.

The photos aren’t all negative though. Miyatake’s aims were more about capturing and remembering what happened rather than publishing and achieving social change. He wanted to be in Manzanar for the duration and have images which showed the entirety of the camp to future generations. There are photos of graduations and Christmases and other events showing how life went on and people had fun and things weren’t horrible even though nothing depicted should be considered normal. Ever.

Sort of ironically, it’s the official WRA photographs which end up hammering the social justice angle of the camps. Clem Albers and Dorothea Lange have different axes to grind—Albers is skeptical of the government and Lange is all about social change—but together their photos capture a much different Manzanar. Instead of the self-sufficient settlement that Adams shows, the WRA photos show the camp at its worst—needing to be cleared and built by the same people who were to be confined there.

Albers in particular is very smart about trying to show confinement while following the guidelines of not showing actual confinement. He frames subjects behind glass or in tight rooms or somehow otherwise confined. And if he can’t do that he includes a caucasian authority figure who, while not being depicted negatively, implies that there is more going on in the image. Why does the military police need to be involved with getting children or the elderly off of a train?

Lange meanwhile sees the internees as tragic figures who are being horribly wronged by their government. Her photos emphasize the existing context of what has been done to the internees. If you include her work of the evacuation before the camps were set up,* this point of view becomes even stronger. They’ve lost so much and are now working extremely hard in an inhospitable place to eek out their living. There’s no future in mind, only our complicity in what’s been done to them already.

*Most famously her I Am An American photo.

Lange and Albers’s photos look more like what I’d expect images of the internment to look like. Harsh, brutal, unjust images of an unjust event. Looking at them solidified my takeaway from Adams’s work about how weirdly great it is. Despite its assimilationist tones, there is something wonderful about presenting an oppressed group not only as humans but as peers who have persevered despite the oppression. All too often we only see the oppression and suffering which, while important to witness, risks making someone else’s pain into a spectacle. 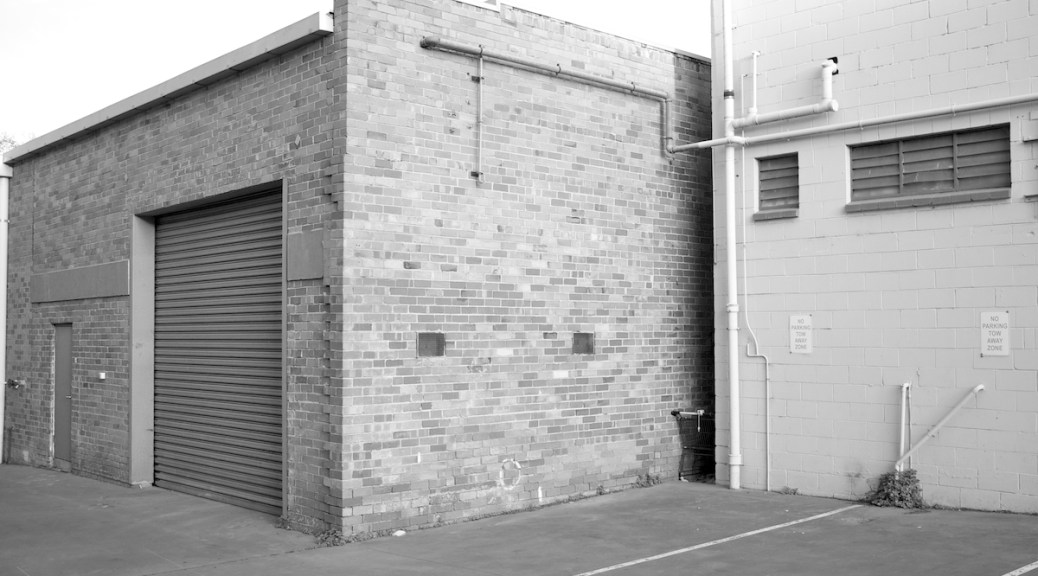 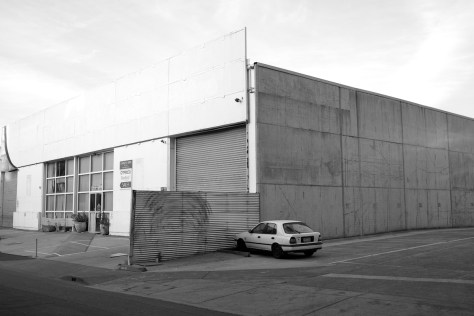 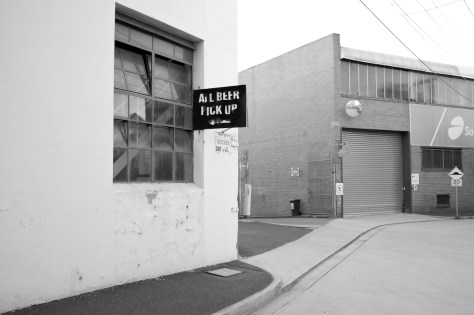 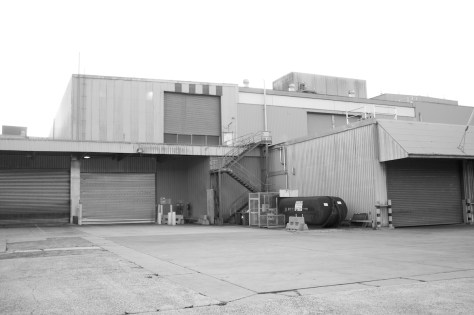 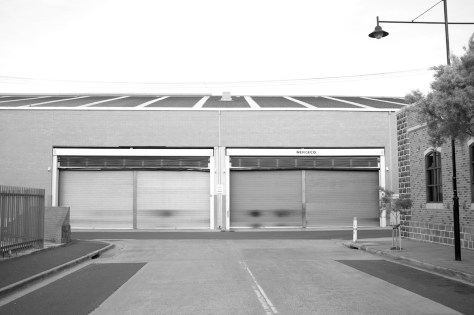 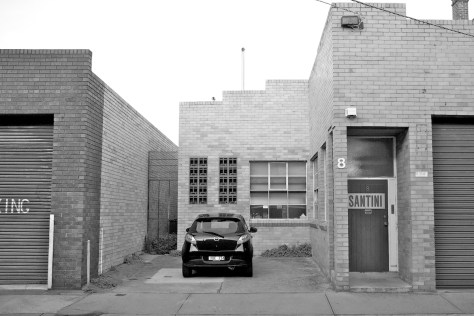 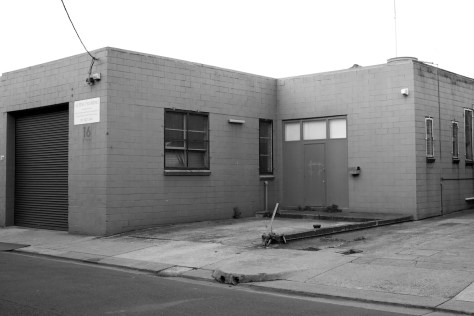 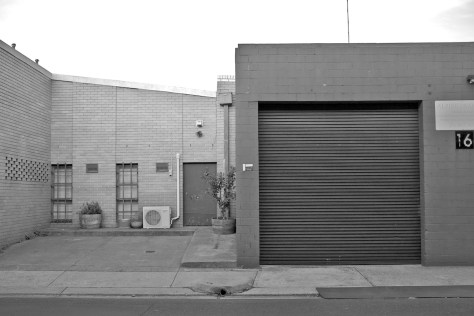 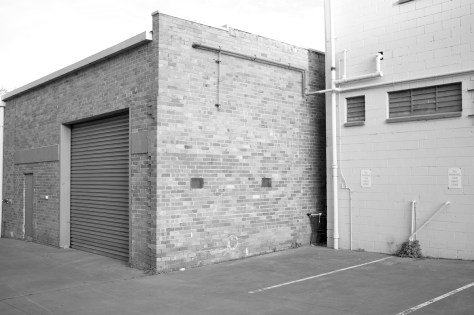 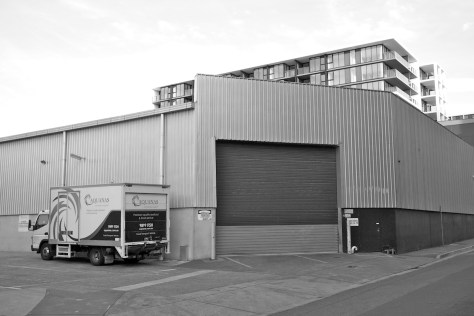 These photos by Eric Gunderson just caught my eye on Tumblr. He has a set of color photos as well but I like the black and white ones better. There’s definitely something baltzy about these but there’s also a lot more physical depth in the images where I get a better sense of the space being depicted. 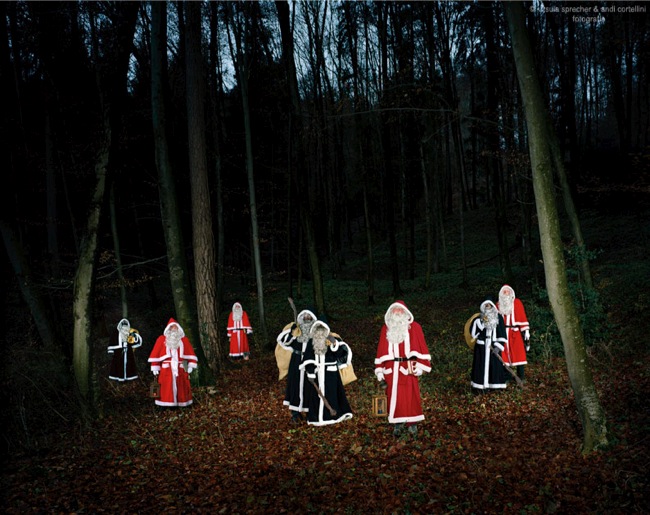 Saturday morning. It’s almost noon. I’m standing in line at the department store cash register. A few people in front of me, behind me a small group forming. I look at those waiting in line—people of all kinds. A broad spectrum of society. What will they do after they’ve finished shopping—how will they spend their Saturday? And what about Sunday? How was their week? How do they spend their free time?

Another one from the Tumblr wires. Ursula Sprecher and Andi Cortellini’s Hobby Buddies is a straightforward typology which manages to be more interesting than its “kind of high school yearbooky” premise would suggest. Part of this is due to the variety and hyper-specific nature of some of the clubs depicted. But a large part is that these photos are often very funny while typically not poking fun at the people depicted.* Which is a very hard line to tread.

*I don’t think any of the photos are meant to poke fun. But some groups, like sadly, the photo club, are probably impossible to not laugh at. 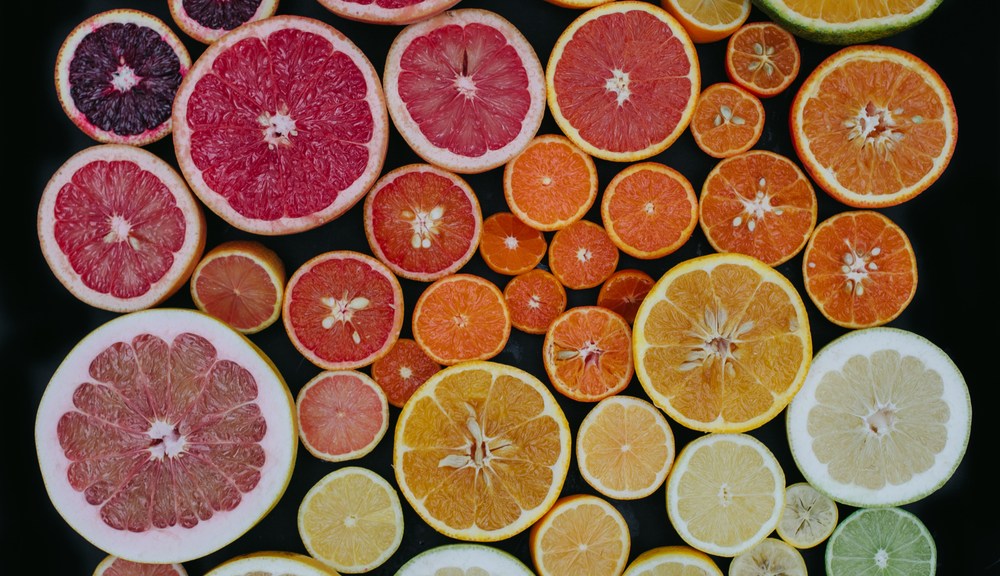 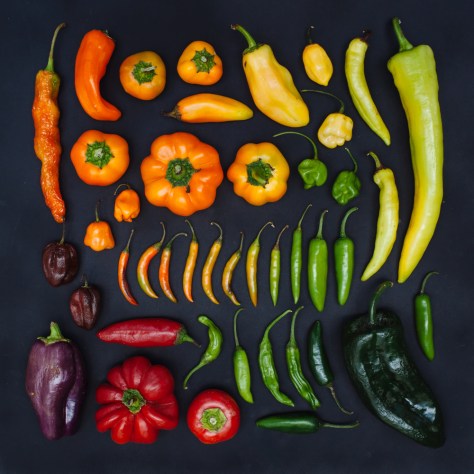 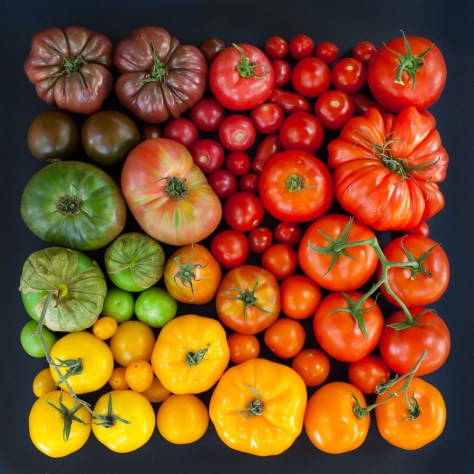 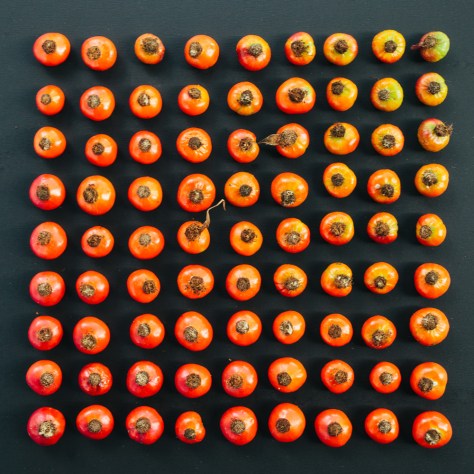 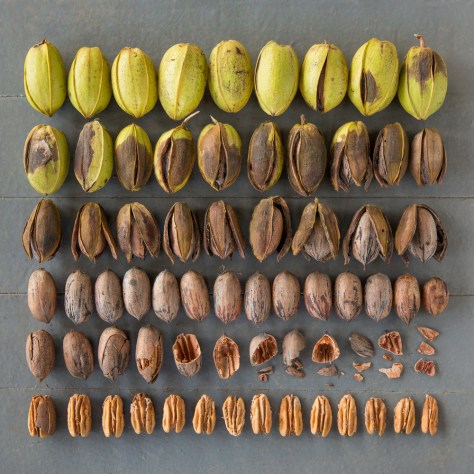 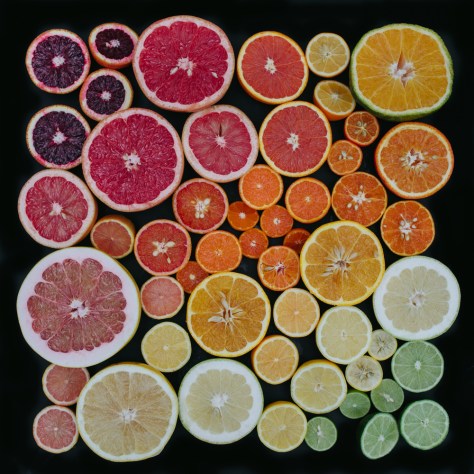 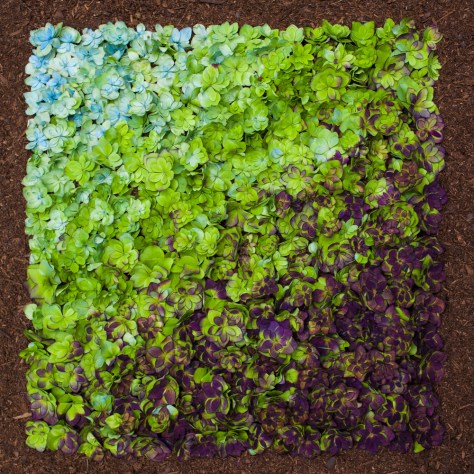 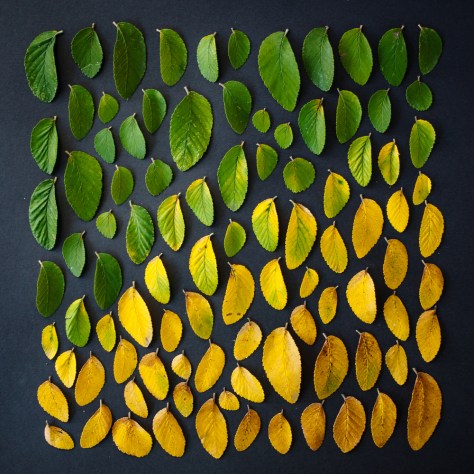 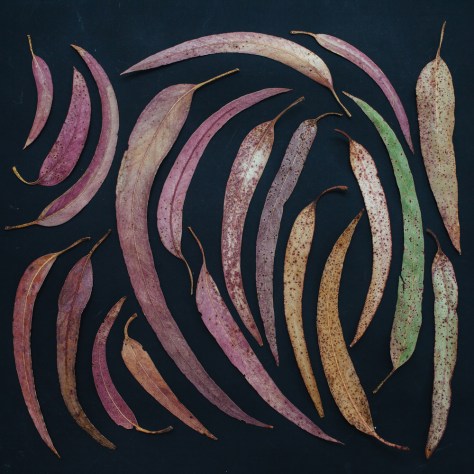 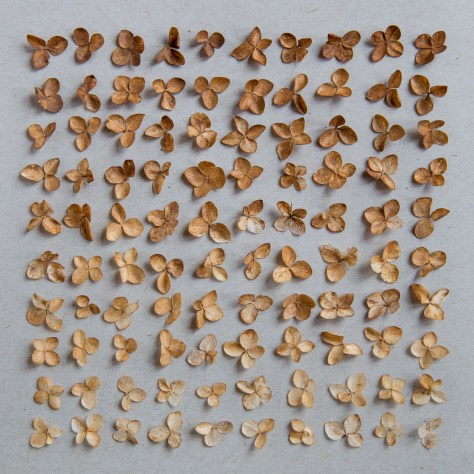 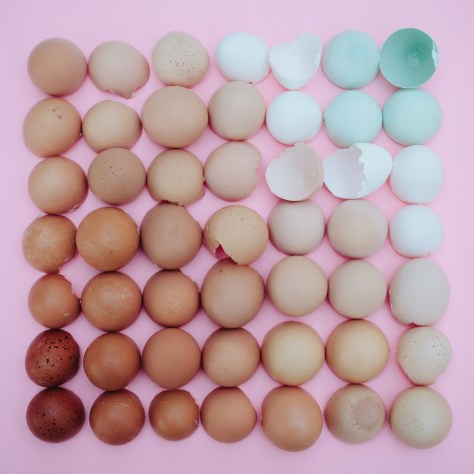 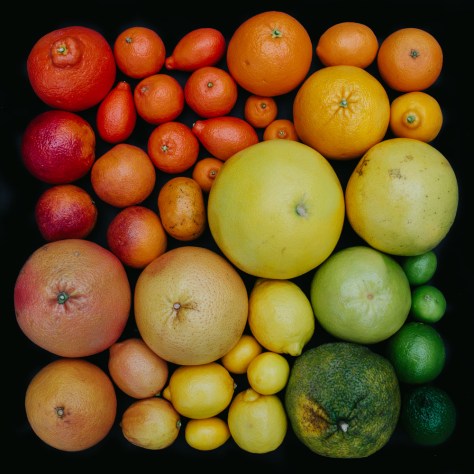 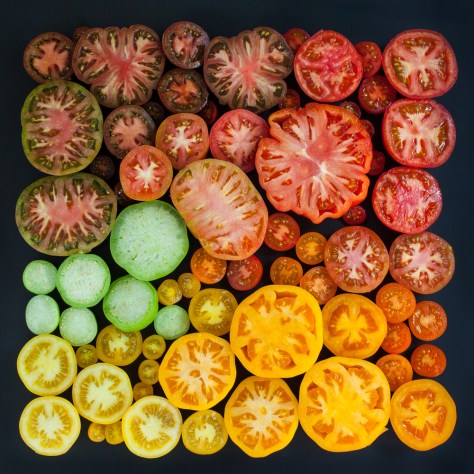 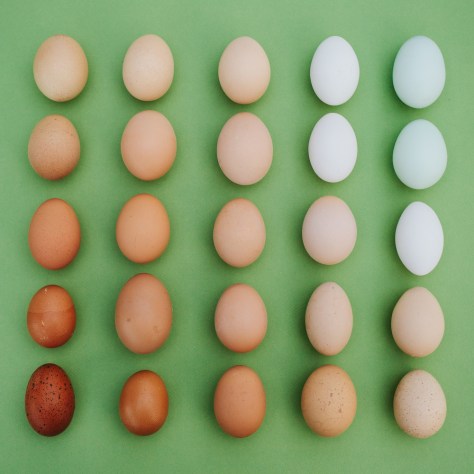 Came across these on Tumblr. Sometimes it really is this (deceptively) simple. This feels like one of my basic design assignments—take a selection of colors and sort them in multiple ways—taken to another level via repetition.

In class, the common mistake was to rely on paint chips—a mistake since paint chips are all based on a white base so the palette is way more limited than anyone realized. The point of the assignment was to really get to know and understand color gamuts and how they interact. You had to sort by light to dark, warm to cool, and bright to dull. It’s not just about hues interacting.

Emily Blincoe’s work is more hue-based but because of the limited palette in each arrangement, does a similar thing since each sorting has to determine the distinguishing feature of the selected objects. They look neat. But they’re also a great exercise in thinking about color. 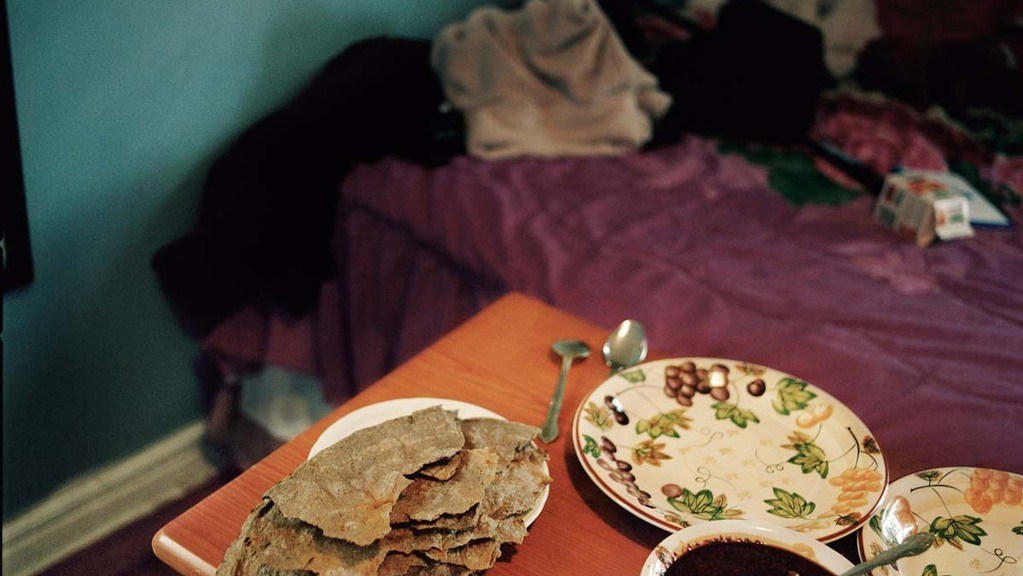 This project is a new interpretation of immigration using color as a unifying metaphor of diversity and acceptance. Each woman will be identified with a color palette so that a mosaic of color represents diversity. 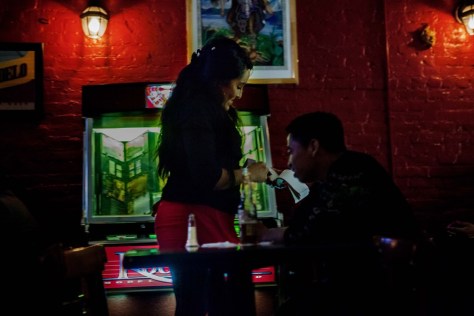 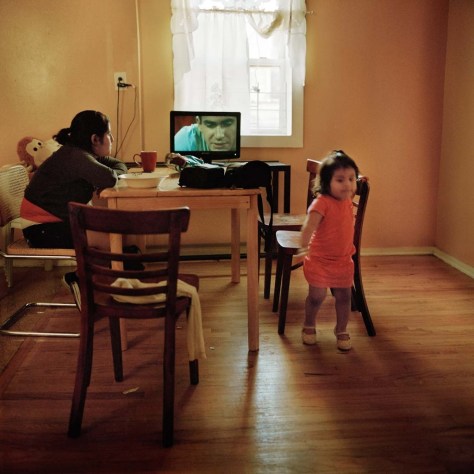 I am presenting the lives of Juanita in yellow, Delia’s in blue and Sabel in green. Homes have deep emotional meaning. Through their homes we get to know them, their motivations, their thoughts and aspirations along with the conditions they live in that reveal how much they have achieved and struggled. They have painted and decorated their rooms according to their own personal story and choice. I am exploring the notion of safety and confidence in relation to space.

Another project which caught my eye on Tumblr. Artspeak and ambitious goal aside, I really like these as representations of a community by someone kind of in that community. These are photos about people, not just of them and the way that so many have of them have detailed captions is as important to the story as just the images.

Also, I really love the way Prieto Arenas is using color. It’s not just the colors of the walls, there’s a lot of subtle lighting and color temperature stuff going on which gives each series an internal consistency.