Note: This post was started way back in May. Welcome to @kukkurovaca time. 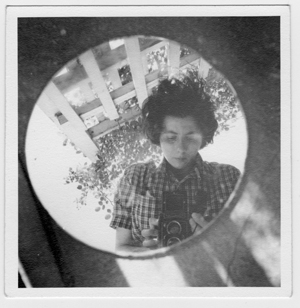 In one of those entertaining instances of RSS synchronicity, two items hit my feed reader at practically the same time: one pointing to a Wall Street Journal meditation by Richard B. Woodward on why Vivian Maier’s own prints aren’t valuable, the other a post at the ICP blog by Chilean photographer Luis Weinstein on the historical and contemporary context for photography in South America.

Both posts take as their stepping off point the relationship between the negative and the print and when, in the life cycle of the image, it transitions from a potential to an actual work. But from that point, they proceed in pretty different directions.

Ansel Adams, a piano prodigy before he picked up a camera, once declared that the photographic negative was like a musical “score,” while the final print was akin to the concert “performance.”….

To extend the Adams analogy, [photographers who had others print their negatives] composed songs or symphonies they did not always play themselves….All of these artists, though, if they delegated one step of the process to others, supervised the final results. And after death, if their estates authorized posthumous work, posterity was able to gauge how a print should look because identical or similar examples had been made when these artists were alive.1

But what if they had died and left behind rolls of film that no one ever developed, even as negatives? Do exposed frames even qualify as photographs or only as potential ones? How is someone supposed to know how to perform a “score” that the artist never finished?

The first reductionist trap we tend to fall into is to think that a “photograph” as such exists once we click the camera shutter, but if we consider that the photograph, in addition to being an object, is also a form of communication (perhaps even a new form of language), then in order for it to come into being, the shutter-click is necessary, of course, but so is processing, and, fundamentally, this technological object, loaded with symbolism, must circulate. Stashed away in the bottom of a box, a valley, or an isolated continent, it does not develop its full potential.

Woodward is concerned with authorship and salability, and ultimately questions whether a photographer who did not produce good prints “judged by Mr. Maloof or U.S. art dealers to be worthy of exhibition or sale” has knowable “artistic intent.” He groups Maier2 with Disfarmer and Bellocq, and contrasts all of these with Atget, whom he groups with Bresson, as a photographer who either made some of his own prints or signed his name to prints made by others. This dichotomy seems pretty arbitrary to me, especially in the case of Disfarmer.

It’s all quite odd, really, unless you are very concerned that the photographer be the compleat author of his or her work. Or, I guess, if you are concerned that the invisible hand of the market is so concerned? Why get so caught up with print authorship as compared to the much more interesting question of editing, particularly as regards the “discovery” of prolific previously-unknowns like Maier or Cushman?

Weinstein, on the other hand, pursues the reality of the photograph away from individual authorship and toward communal use, on both regional and global scales. He points to the need of a photograph to circulate in a community in order to have meaning, and to the way in which political and economic contexts drive South American photography toward both a politically aware content aimed at the public good, and also to collective/collaborative production and distribution.

It’s an illuminating counterpoint to hand-wringing over whether or not Maier had authorial intent, whether her “score” can be “performed.” The artist cannot be treated as a black box which spits out photography, any more than the camera can. Artistic intent has to be placed in a context of communally constructed meaning.3

On the global scale, Weinstein calls attention to the way photography produced within South American countries is positioned at the periphery of photography as a global medium hegemonically centered in the US and Europe — such that it can only act as a “passive choir” or else as an “exporter” of “exoticism as an image of our reality.”

Weinstein raises the case of Hercules Florence, which I had been completely unaware of. Apparently he independently invented in Brazil some variant(s) of photography at about the same time as Fox-Talbot (So, after Niépce but before Daguerre):

The existence of Hercules Florence and his independent invention of a photographic process in Brazil in 1832, investigated by Boris Kossoy in the 1970s, does not substantially change the official story; on the contrary, it confirms that both a physical object (the image on paper, glass, or metal that Florence did develop) and its circulation (which Florence never achieved on a sufficiently large scale) are necessary for us to be able to speak of “photography” in the sense of an archive of images, given social meaning and recognition and representative of a regional practice.

In a sense, both posts are partly about the specter of a counterfactual. Maier’s posthumous printers labor beside the ghost of the notional Maier who might have made or directed authoritative prints of her work. In Weinstein’s post there is the tantalizing alternate history in which South American photography might have been at the center instead of the periphery of a global medium.

To continue arbitrarily seeking parallels in posts that are really connected solely by my having read them at the same time — compare the US art market as requiring a level of quality in Maier’s prints that Maier herself apparently never met, with Weinstein’s explanation for low-fi production and distribution of photographs in South America:

It is not easy to divert money to the capture, printing, circulation, and exhibition of photographs when scarce resources compete with the daily necessities of food, housing, and shelter.

The solution often involves low-cost printing and circulating the images by hand, so that not only the content, but also the form of the photographs are modified by the conditions of production and the reality from which they emerge.

Note this is framed as the influence of socio-economic conditions upon form and content rather than merely as a limitation. Weinstein is describing neutrally a characteristic trait and its origins, rather than excusing a deficiency. But I wonder, is it also a factor (whether real or supposed) in maintaining the peripheral status of those photographs relative to, say, the US art market? (That is, the same one in which Maier’s prints might not be considered to have value.)

Of course, much art in the US deploys low-fi esthetics, but is that only acceptable if it is avoidable? Perhaps constraint must be filtered through luxury in order to be perceived to show artistic intent.4

Later reproductions of photographs are often made very differently from early ones — better, it is understood, but really just larger, contrastier, sharper, cleaner. These reproductions are often actually vastly different from the originals. I think this has been true almost any time I’ve seen exhibitions of modern reprints of historical photographs. We are not supposed to feel there is anything wrong with this, because the reproductions are either produced by the artists or authorized by them or by someone, whereas with Maier we are perhaps supposed to feel some concern, because she and her heirs are not here to serve that legitimating function.

But I think it is equally problematic in all cases, no matter the consent of the photographer or rightsholder, for historical photographs to be remastered in a way that breaks the integrity of their connection to the conditions under which they were originally made made and circulated. At least, if there remains any intention to trade upon authenticity, either in a scholarly or a commercial context. (And yes, really the problem is with the idea of authenticity, rather than with the practice of alteration.)

Of course, the more important question I should be posing after reading these two posts is: Why are we so interested in scrutinizing, interpreting, and cyclically (re)blogging Maier, as opposed to entire living, practicing communities of photographers who are operating in communities outside the mainstream, US-dominated art discourse?

I sometimes wonder if photographers like Maier — the prolific ones who cannot stand up for themselves against the weight of retrospective curation — are perhaps desirable and valuable precisely because they represent a kind of mirror for the art world, reflecting interpretation and ideas back with perfect clarity and adding nothing of themselves to mar the face of contemporary narratives and values. Much more appealing, perhaps, to spend time with such surfaces than to look upon the faces of other people.