I really liked SFMOMA’s other photography show, About Time. Maybe a good pun is all I need. But the show was literally about time and how the essence of photography is in messing with that element. It works well as both a history of photography and as a nice slice into the permanent collection.

At its most-basic level, photography is about depicting a moment of time in the photographic image. Sometimes we’re conscious of the motion because a subject is blurred—as seen in old photos where motion blurs due to the technical limitations of the media or in newer ones which blur motion on purpose—or whatever you want to say is going on in Hiroshi Sugimoto’s movie theaters—in order to make an artistic point about time. Similarly, John Divola’s “As Far As I Could Get” series is explicitly about having time in the frame.

Other times the photograph is clearly about stopping motions which are too fast for our eyes to see. These photos often feel more like science experiments than art but for every Doc Edgerton there’s someone like Aaron Siskind. This section also includes works by Eadward Muybridge and Paul Graham which get at the way that photography both captures and replays motion for us.

As much as photography education still focuses on the “decisive moment” it’s important to see that a “moment” can be anywhere from the thousandths of a second to many hours. And that even after that, there might be nothing decisive and instead the combined moments tell the story.

We’re also very familiar with photography as evidence that something has happened. Rather than being about the moment of time in the frame, it’s about what happened before the photograph—or what’s going to happen afterward. These photographs rely on our understanding the image’s context. These are the photos which come closest to the ways that we all use photography every day.

Everyone uses photographs to mark the passage of time. Family albums, kids growing up, parents growing old, the photographs are waypoints which we’re all familiar with. Fittingly, this show dedicates an entire gallery to The Brown Sisters* since Nicholas Nixon’s project is one of the best examples of photographs telling a story about what happens over time.

*Though I found it interesting the latest print was missing.

Similarly, there are many photographs of cities which show their change over time. While SFMOMA had no series which covered a period of change, we saw photographs marking what’s about to be lost—e.g. Zoe Leonard’s storefronts or Janet Delaney’s South of Market—or, as with Eugene Atget’s photos of Paris or Alfred Stieglitz’s photos of New York, what’s being built.

Instead of gradual change, photographs also document what just happened. This show has photos by Rineke Djjkstra and Frank Gohlke which require us to know the story about what’s being depicted. This context isn’t optional. We need to know that the bullfighters have just come from the arena or that Mt. St. Helens just erupted to really understand what we’re seeing.

There are also some wonderful George N Barnard photos which show the impact that war has on the land. These photos of the Sherman campaign are both about evidence of what’s going on—both before and after the photo was taken—but also hint at larger-scale time issues in photography. Namely that you don’t have to photograph evidence of an event immediately after the event has occurred.

Photography is wonderful for revisiting a place where something happened a long time ago. We need the same context about what happened but we’re no longer looking at the evidence of that event. What’s of interest is what’s happened in the time since that event happened and what our understanding of that history brings to our understanding of the scene in the photography. In addition to Mark Ruwedel, I enjoyed being introduced to Drex Brooks’s photographs of locations from the Indian Wars.

What I loved most about this show though is that it dealt with photographs as objects in and of themselves. It’s not just that photographs capture time in the image, they also exist as physical things which are subject to the forces of time.

Phil Chang’s unfixed photographs reminded me of Rauschenberg’s white paintings in how they’re about the concept of repeated aging despite being essentially blank. They critique how art, especially photography, is conceived of as being something which doesn’t change once it’s been hung on the wall.

Jason Lazarus’s work is worth special comment here because of how it’s about both how we try to attach extra context to the photographs and how that content is often hidden and forgotten. Rather than focusing on the photographic image, Lazarus shows us the backs of the photos where people have written notes about who’s in the photo, when or where it was taken, notes to the intended recipient, etc. None of these things is typically art but they’re all part of the medium and how we relate to it.

For a relatively new medium to already be wrestling with issues of preservation and aging and the way that the art is a physical object beyond what it depicts is a lot of fun to see. I don’t see these discussions in most museums. Preservation is performed on an artifact, but the art itself doesn’t usually concern itself with how it wants to be preserved. I’m looking forward to further explorations along this line in future shows. 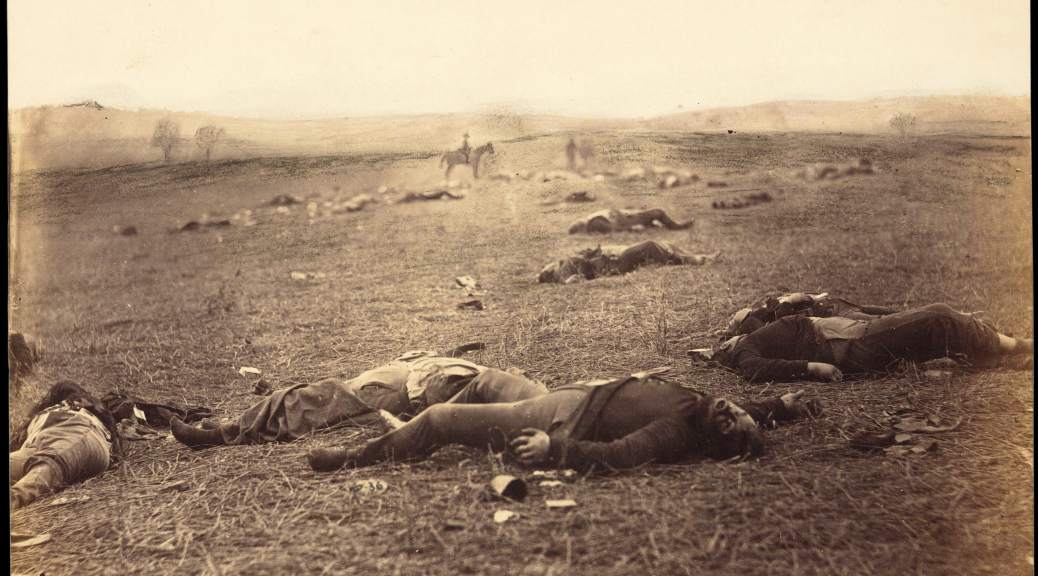 They were men. They crept upon their hands and knees. They used their hands only, dragging their legs. They used their knees only, their arms hanging idle at their sides. They strove to rise to their feet, but fell prone in the attempt. They did nothing naturally, and nothing alike, save only to advance foot by foot in the same direction. Singly, in pairs and in little groups, they came on through the gloom, some halting now and again while others crept slowly past them, then resuming their movement. They came by dozens and by hundreds; as far on either hand as one could see in the deepening gloom they extended and the black wood behind them appeared to be inexhaustible. The very ground seemed in motion toward the creek. Occasionally one who had paused did not again go on, but lay motionless. He was dead. Some, pausing, made strange gestures with their hands, erected their arms and lowered them again, clasped their heads; spread their palms upward, as men are sometimes seen to do in public prayer.

—from Chickamauga by Ambrose Bierce

While I was looking at War is Beautiful I couldn’t help but think about the iconic, well-known photos from Vietnam or World War 2. Those images are the beginning of what has become the cinematic language of war photography. They’re what the movies reference and are part of our common understanding of what war photography is supposed to look like.

Instead of looking at those images though, I got Jennifer Watts’s A Strange and Fearful Interest off the shelf and decided to look at Civil War photographs. Looking at the Civil War photography shows the beginnings of our current visual culture. We can see the beginnings of personal image sharing as well as the ability for images of “real life” to become larger than life. At the same time, we’re seeing other directions or standards that could’ve been taken.

The Civil War reflects photography’s first big maturation in terms of both how we understand what we’re looking at and in terms of figuring out what practices actually work for documenting and disseminating images. There were no set rules or perspectives to copy, the field photographers had to figure things out on their own. Nor were there guidelines about what’s ethically acceptable with regards to subject matter or staging a scene. The photos of dead soldiers*—and the way those bodies were often moved by the photographers—are so wrong in terms of the current rules of photography.

*Specifically noted in the book with the Antietam photos but applicable to Gettysburg and many other battlefields too.

Where the Vietnam and World War 2 images are still familiar to us, the Civil War photographs are more abstract. Their look—the staging, motion blur, toning, edge effects, etc.—reads as romance and nostalgia rather than documentation. They don’t look real to us anymore even though their existence fundamentally changed our understanding of both warfare and death.

But the photos themselves did say a lot about the war and the nature of violent death which, while people obviously knew,* were not images which were disseminated. There’s something about seeing the images of the bodies in the battlefields which drives home the cost of it all. And it doesn’t surprise me at all that we created National Cemeteries as a response to the Civil War. Our collective sense of war and its outcomes changed during the Civil War—in large part due to having a new medium with which to share and remember these things.

*Warfare, and in particular the Civil War, being something which touched a much larger percentage of the population then than it does now.

It was not just images of war which were suddenly being disseminated across the US. Tintypes and ambrotypes allowed for soldiers to both send images back home and keep images of home with them on the front. While still very much a portrait/sitter arrangement, this was a much more democratic* product in how it opened up the ability for this kind of personal connection to many more people.

*Reminding me of the creation vs consumption debate a few years ago. While I still agree that the Brownie opened up the true democratic floodgates, tintypes, ambrotypes, and cartes de visite did create a massive change in how we treated and understood images too.

Since Confederate photographers all but disappeared after—if not during—the war, J.D. Edwards is the only Confederate photographer featured in the book. This explicitly calls attention to how our visual understanding of the Civil War is almost exclusively the Union point of view. And as much as I hadn’t realized this before, it reminded me how most of my conception of war photography is aligned with the point of view of the US or the west.

I really like George N. Barnard’s landscapes of Sherman in Georgia. Barnard kept taking landscape photographs—very much in the style of O’Sullivan or Watkins—where the view is what’s important. In Barnard’s case though, rather than the promise of taming unspoiled nature, we see the architecture and landscapes of war.

The book also goes into the Lincoln assassination and how Alexander Gardner’s mugshots—well, proto-mugshots since the mugshot hadn’t been invented yet—as well as his photographs of the hangings get right at the intimate relationship that photography has with death. And then there’s his Lewis Powell image which, among all the retro-nostalgic photographs in the book, leaps off the page as being, still, strikingly modern.