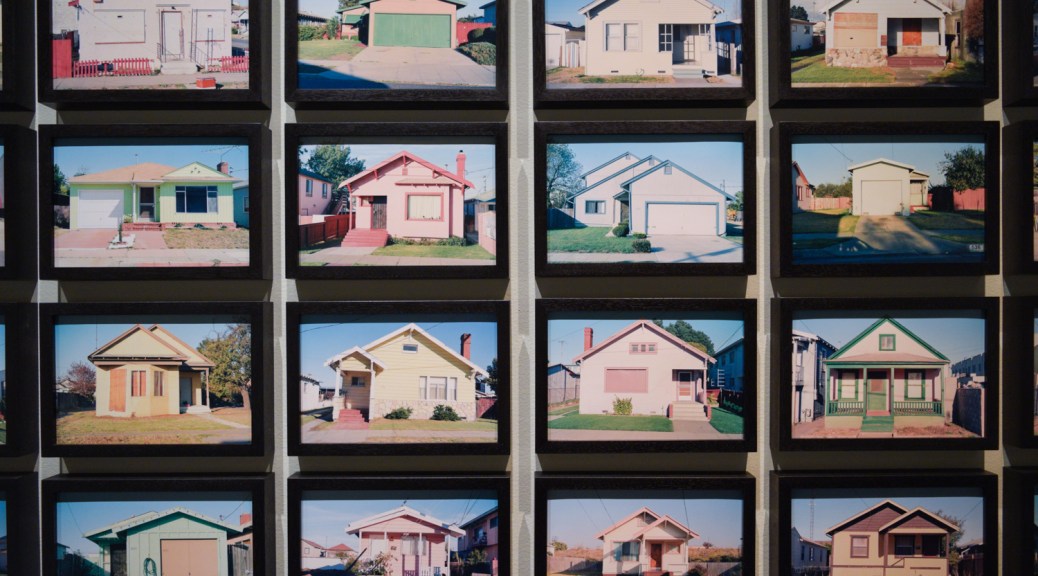 Took my second trip to Pier 24, this time to see their Grain of the Present exhibition. Pier 24’s shows are so expansive and generous with the amount of material from each artist that I find it difficult to write about the show in general. Too many directions to go and things to think about.

That said, most of the photographs on display do reflect a sublime sense of photography as a reactive, perceptive medium. Rather than being previsualized images, we see the products of the photographer recognizing something they liked and finding a way to get the shot before the moment passed. At their best, the resulting photos both show each photographer’s unique point of view and help us learn more perceptive ways of seeing the world around us.

The highlights especially deserve to get mentioned individually. I’m just going to go in alphabetical order.

For Robert Adams they had a selection of his Prairie shots up. Adams is in this show because of his involvement in New Topographics but instead of looking at any New West of suburbs and development, we got to see effectively pre-suburban living. Same eye but a very different feel. Time’s stopped. Hope remains. There’s something elegiac because we can sense the decline coming.

Lewis Baltz meanwhile continues being arguably my favorite photographer. I’ve never seen all of Candlestick Point before and I’ve very glad I got a chance to do so here. Being able to explore the photos in a grid is a wonderful way to explore the work and feel my way around both the location and the images. There’s so much sublime subtle stuff going on with the light and the shadows and reflections.

LaToya Ruby Frazier is probably the highlight of the show. I love the mix of scales and subject matter. Her family photos are small and intimate and feel incredibly personal. Yet at the same time I’m reminded of watching my grandparents age. Her cityscapes are completely different. Large, detailed, inquisitive, showing aging buildings and disappearing industries. And they work perfectly with the family images. The big photos need to be big. The small ones need to be small. But in all cases the images are keenly seen and personal.

Lee Friedlander’s Little Screens are hilarious. They’re very much of their time in terms of the hardware, furniture, and tv shows shown. But they’re also entirely suggestive of our screen addictions today. It’s one of those simple ideas which could come off as either a trite gimmick or heavy-handed snark but instead Friedlander’s treatment reveals the humor of how we just shove the TV wherever it fits in a room yet it still becomes the focal point.

I enjoyed Ed Panar’s work and how he keeps returning to the same subjects. While many of the galleries emphasize the idea of being receptive to images when you’re out and about, much of Panar’s work can be seen as recognizing that something as imminently familiar as the view from your front porch or your daily walk is also always changing and will occasionally present itself as a photo worth taking.

Henry Wessel is also always great and I was very excited to see his photo of Richmond again. It was one of my favorite things in the new SFMOMA yet I couldn’t find an image of it anywhere online. I’m glad I got a second chance. Wessel, probably more than any other photographer in this show, fits the description of someone who’s out there just finding photographs with his camera. I know there’s more to it than that but there’s a certain casual grace in his shots that I both admire and envy.

He’s neither super-precise nor is he consciously rough. The light and tones are always this perfect combination of having a slight low-contrast glow while still popping crisply off the page. And his sense California reminds me of home—especially now that I live in New Jersey.

And Vanessa Winship. I like her very much. Her work, especially her portraits, also has a certain grace about it. It’s much more precise than Wessel but there’s a gentleness in the images where I don’t feel like I’m being prompted to gawk at anyone.

I didn’t include Diane Arbus or Stephen Shore in the highlights because, as great as their work is to see in-person, I’m already very familiar with it. While all the older photographers in the show were selected because of their association with New Topographics or New Documents, only Arbus’s and Shore’s work has a massive overlap with the images displayed in those two exhibitions.

That said, Arbus is a nice example of how being receptive to a photograph doesn’t mean grabbing a snapshot and moving on. Arbus’s portraits are keenly seen in terms of how she chooses her subject. That the resulting images are part of an impromptu portrait session doesn’t diminish their spontaneity.

What didn’t fit the Theme

Each photographer draws inspiration from the ordinary moments of life, often seeing what others overlook—and showing us if you look closely, you can find beauty in the smallest aspects of your surroundings.

Some of the photos on display though just didn’t fit the concept of the show for me. Some may ask us to look closely and see what other people may not see. But they’re not really ordinary moments. Others are indeed ordinary moments but do not show us anything novel. Note, this doesn’t mean that I think these photos are bad, just that, within the context of this show, I wasn’t feeling it.

First, Bernd and Hilla Becher. I love them and their typologies and can sit in a room full of those photo grids for hours. But there’s no sense of moment at all in the photos.

Nicholas Nixon’s Brown Sisters is sort of similar. It’s a project I adore and am already steeling myself for when it devastates me—it’s guaranteed to eventually devastate me. And it does capture an ordinary moment. We all take family photos and can relate to the truths within this project. But this particular project has always been clearly much more than a mere family photo in both the repetition and the collaboration between all five people involved in its production that it feels out of place among the rest of the projects on display.

I feel a bit bad putting Awoiska van der Molen’s work here but I just never got the sense of moment at all from it. Her photos are nice enough and, in a different space with a different context,* may have moved me. But in this space, they felt like a more academic exercise amidst photographers who were working on a much more intuitive level.

*The Pier 24 no context thing may also have served her work particularly badly since her titles and descriptions are just as vague.

And Garry Winogrand’s Women are Beautiful was the exact wrong photo series to choose. Yeesh. I’ve tried to rationalize my feelings about it in the past but I also don’t think I’ve ever been subjected to the entire set. Caille Millner is right. It’s creepy and intrusive as all hell. Yes the ice cream woman is a great photo. As is the LaGuardia bar photo. As are a few others. But the rest? Good lord. For most of those photos there are literally only two reasons why he triggered the shutter. And they’re usually braless.

To include those in an exhibition of “see what others overlook” is either hilariously tone deaf or an ironic joke doomed to fail due to Pier 24’s lack of context. Winogrand deserves better than that. I would’ve been filled with joy had it been The Animals which got selected.

I don’t like this tendency and feel like it frequently gets in the way of the photos. It’s probably no surprise that the two new photographers whose work I really liked had a mix of small and larger prints which gave me the impression that they’d really considered the optimal size for each image.

Alec Soth’s Niagara is a series I’m familiar with but which I’ve never seen in person. I like it better as a book. The giant wall-size photos of the falls and the hotels work ok. Still too large but the geometry of the hotel architecture gets abstracted nicely at that scale. The portraits though are kind of monstrous. I find myself wondering if the sitters realized their nudes would be larger than life and if Soth intended for us to gawk at them. It’s not an empathetic scale.

Eamonn Doyle’s i suffers similarly in that it feels both intrusive and, rather than inviting us to look closely, enlarges everything to the point where subtlety gets lost. I was dubious as it was about whether his cleverness was enough to sustain a book. It definitely doesn’t scale to giant-size images. Sometimes a clever idea only works at a small scale. I can see these working fine arranged as small prints on a single wall the way that Winogrand, Friedlander, and Baltz were displayed.

And holy moly Women Are Beautiful would be an order of magnitude creepier if it were printed at modern sizes.

A few random comments and observations which don’t fit with the rest of this post—many of which refer to specific things I’ve not seen before.

While the lack of context information at Pier 24 doesn’t bother me too much, I do find myself being dismayed by the absence of any process information too. I think it’s important to know what kinds of prints we’re looking at as the distinct photographic printing processes all result in different kinds of objects.

The grid of color Wessel photos! Not something I every imagined and definitely not my mental conception of his work. I was amazed that they kind of amazingly had the same light and contrast as his black and white photos do. How does he do that?

I have never seen non-typology wide Becher photos before either. I like that they still include typologies in the frame. Also, looking at their grid of spherical tanks makes me want to shoot a typology of soccer balls for all the different patch tiling.

San Francisco is full of “Summer of Love” celebrations right now. That Arbus’s Boy with Straw Hat is ALSO from 1967 is a bit of a coincidence but also felt like a wry joke at how it feels like the summer of 1967 has become a myth about peace love and happiness reigning unencumbered by war or racial inequality. 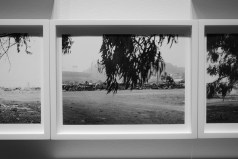 And back to Baltz’s Candlestick Point. As much as I enjoyed the entire set I also couldn’t help shaking the feeling that I must’ve parked in a few of these locations. Candlestick’s overflow lots were dirt and occupied a lot of the land that Baltz was photographing. Many of the images felt familiar to me as places which I walked through before and after Giants games with that oddly hot and direct mid-day sun or the brutal cold wind which whipped up in the afternoon.