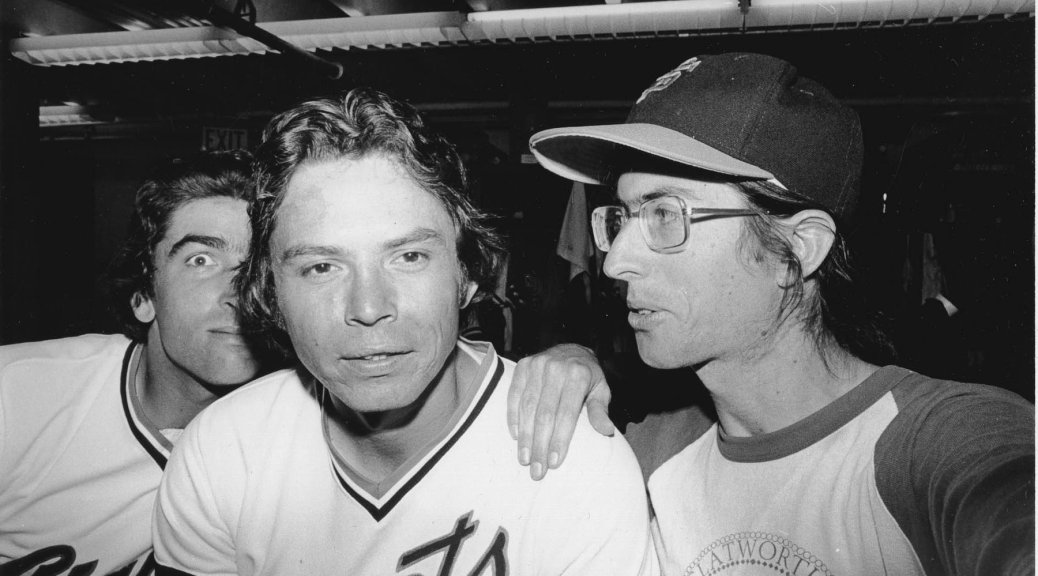 I was sad to miss the Larry Sultan show but I’m very glad I made it up to SFMOMA for the Mike Mandel show. Sometimes it’s nice to just see things that are fun and make me smile.

This isn’t to say that Mandel’s work is somehow simple or trivial, just that the concepts are both remarkable easy to grasp and Mandel’s default approach mines the humor. It’s a goofy humor which I really love and, despite being funny, manages to maintain a certain seriousness and empathy for the subjects. I’m not laughing at the photos or the people in them, I’m laughing because of them and what they make me recognize. This is an approach which is sadly lacking in a lot of photography.

Seven Never Before Published Portraits of Edward Weston is a perfect example of this. It could easily be seen as a stunt. Or something making fun of Edward Weston—or all these other Edward Westons. But it avoids those pitfalls and becomes so much more. It touches on how everyone takes and consumes photography—each of the Edward Westons supplies a portrait and talks about photography. It touches on the nature of fame and what it’s like to have a name in common with someone famous. It provides a sympathetic glimpse into seven men’s lives. Seven men whose only thing in common is that they share the same name as a famous photographer and were generous enough to share about their lives to a complete stranger.

It’s also hilarious. Not because of who those men are what their responses are but because there’s simultaneously an everyman, what if I shared my name with someone famous, thing going on plus the sly suggestion that maybe each of these guys is actually the Edward Weston. I couldn’t wipe the smile off my face when I read each of these and looked at the photos.

Mrs Kilpatric is also fun. So simple that in many ways it’s just about goofing around with a friend and neighbor. But the unposed—well, semi-posed—unplanned nature of it all is completely disarming. She’s incredibly trusting of Mandel to let him take her photo no matter what she’s doing or wearing. But the photos are great. They’re the kind of photos that she might not like because they’re a bit silly but which her family members will love because of how they portray her.

People in Cars is a similarly straitforward project.  One of the things which stands out looking at Mandel’s work is how visible he must’ve made himself as a photographer. Even a series like this which lends itself to surreptitious shooting is very clearly full of interaction. Most of them are people being amused by whatever Mandel is doing when he’s behind the camera. Which makes the few where the subject is upset really stand out in a way which produces a wry smile from me.

Myself meanwhile had me laughing in the gallery. I love the Half Dome one (of course there’s a Half Dome one) but they’re all great. Mandel is indeed a goofball. The idea of photobombing his own photos is hilarious. As is the way that the other people in the frame end up having to react to him. Sometimes there’s surprise, other times there’s group acceptance, and sometimes he’s ignored. But you know that everyone in the frame has watched him set up the tripod and camera and is now trying to figure out what the hell this skinny kid with long hair is doing standing with them while the camera is buzzing.

You can hear the camera buzzing.

There’s confusion. There’s joy. There’s curiosity. There’s all the things that we all do when confronted with a camera. But Mandel is in the frame along with the “subjects” adding an extra layer of bizarreness and humor. It’s fantastic. 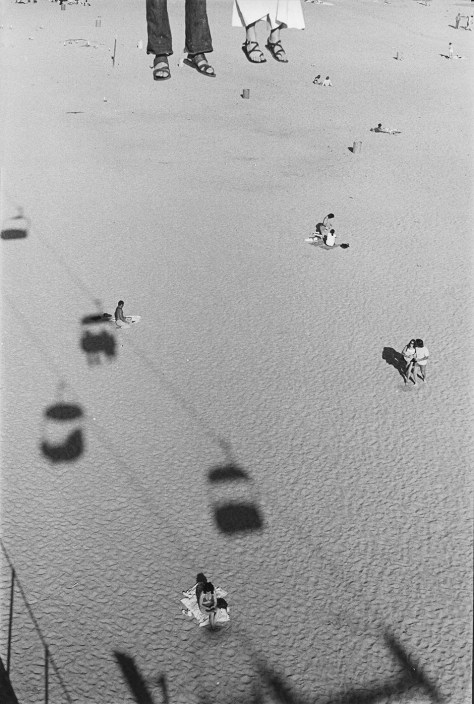 Looking at how Mandel interacts with the people he’s photographing brings me to his photos of The Boardwalk.*  Having just been at Pier 24 earlier that day I couldn’t help comparing Mandel’s photos to Winogrand’s. Mandel isn’t creepy even though many of his subjects are Winogrand-bait. It’s not just that he’s made eye contact or something before taking the photo, there’s a level of interaction which gets a flirting versus a death stare.

*The first time I’ve seen an extensive series about a place which I’m super-attached to as home. My kids love going every summer. Just seeing what it looks like in the 70s and how much has, or hasn’t, changed is wonderful from a purely documentary point of view.

And yes, a lot of this might be 1960s New York versus 1970s California. But Mandel was a skinny goofball kid and Winogrand was a larger more serious presence. And it certainly seems like their approaches were also quite different—especially in that Mandel appears to be having fun with his photography. It doesn’t feel like an obsession or quest but instead just messing around and playing with the camera.

Which brings us to Mandel’s baseball photos. I had a hard time viewing these as a photographer since I was a Giants fan first and those instincts are much more deep-seated than any of my art appreciation instincts. But they’re great. I’d love to spend a lot more time with SF Giants, an Oral History—it’s a shame this isn’t part of the catalog—but just looking at the photos is plenty enjoyable.

Mandel again both includes himself in the frame and manages to create an interaction where players are encouraged to be silly rather than serious. The resulting images feel like insider snapshots more than anything else. Part of me wonders whether this approach would’ve worked on a better team—mid 70s to mid 80s Giants were not so good—and part of me feels like he only took photos of the players who were cool with him anyway.

In any case, even with everyone having access to social media, Mandel’s photos manage to capture a view which we still don’t usually see.

And his light painting images caught me by surprise. This is one of those gimmicks which has been beat to death as self-indulgent Flickr explore bait. Mandel‘s images though show that he understands the game. Rather than being a gimmick they illuminate key action traces like how and when a batter twists his wrist during a swing or a pitcher’s hands come apart during his windup. It’s motion capture which highlights important details in the motion. 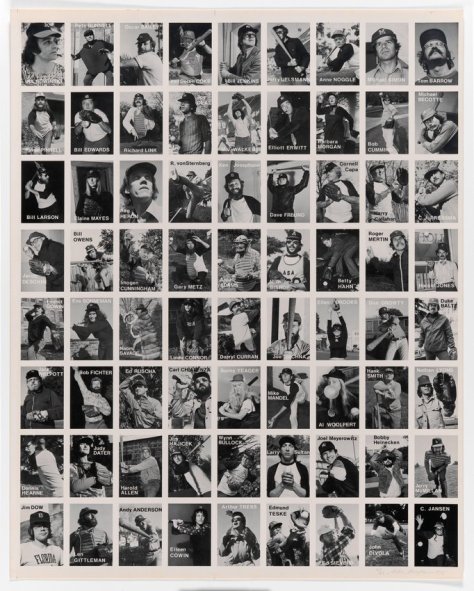 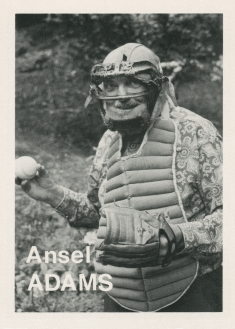 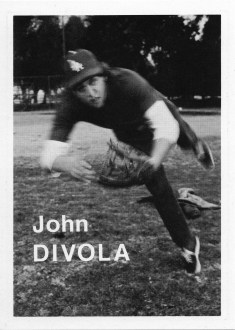 Which brings me to the Photographer Baseball Cards. Aside from Evidence, these are what I knew best about Mandel. I’ve always loved this project but had never really had a chance to look at a complete set before. So many wonderful things going on with these just as photographs without even getting into the baseball card aspect.

*Though women are still outnumbered like four to one and the non-white photographers can be counted on one hand. As always, lists are a bad idea.

I love that we get to see what the photographers look like. That Lewis Baltz is called “Duke.” That John Divola’s card features him in blurred motion. Divola’s card is the best in the entire set in terms of capturing a sense of what Divola was interested in as a photographer—pushing the boundaries of the concept of what a photograph depicts, or should depict in terms of time or reality— while also being “baseball” in terms of its pose and language.

I love the way that these are mass-produced offset lithography. Photography, especially art photography, is almost always obsessed with process and image quality. Even in  a book we get duotones or quadtones and insanely fine line screens and every attempt to make them look like “real” photographic prints. But these are printed by Topps. The line screen is coarse. The cuts are common. The ink is black only. And that’s not only appropriate but any other option would be just wrong.

I also appreciate that SFMOMA dedicated two rooms to showing samplings from many of the depicted photographers. This is helpful as both a reminder to people like me who recognized names but momentarily blanked on what they photographed* and an explanation for people who may have questioned whether the subjects of the cards were photographers at all.

*Nathan Lyons, Art Sinsabaugh, and Judy Dater in this case for me.

Sometimes though the photograph selected by SFMOMA felt like the wrong choice. This sampling isn’t the time to go on a deep dive into a photographer’s work but rather an “explain this person in an image or two.” So yes, I was mightily confused why they selected an black and white Eggleston image to display for him.

All in all though, a great show. I knew who Mandel was when I walked in. I just wasn’t aware about how much I liked his work. Also, while I still have concerns about SFMOMA’s new direction turning away from local art and artists—especially given the general sense of its upcoming exhibitions being much more FAMSF rather than what I’ve gotten used to at SFMOMA—I have to give them props for putting on a show which couldn’t possibly be more local.