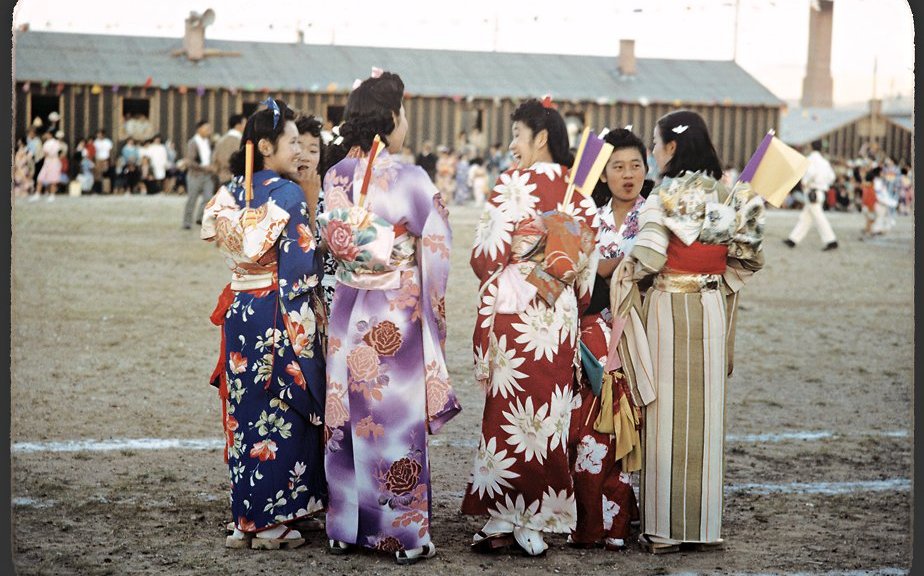 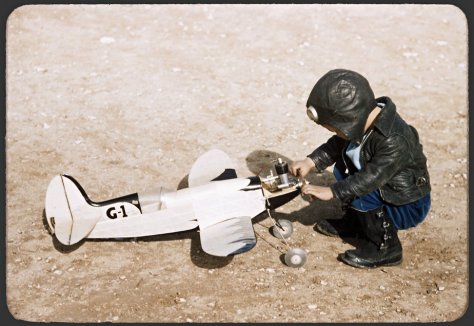 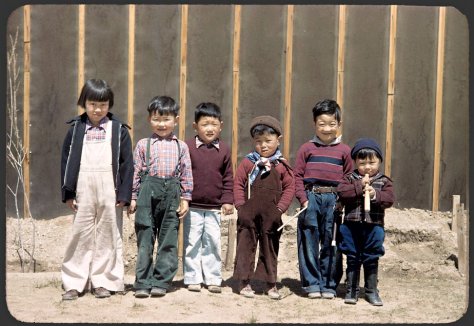 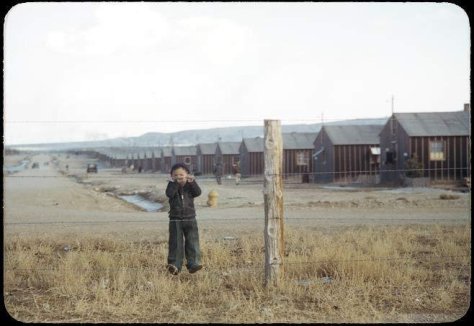 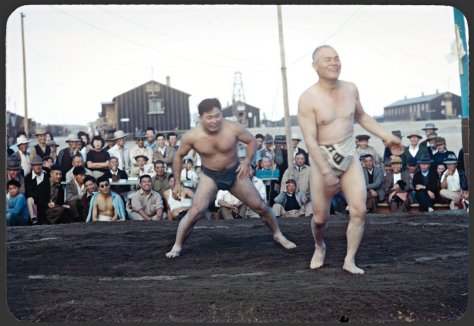 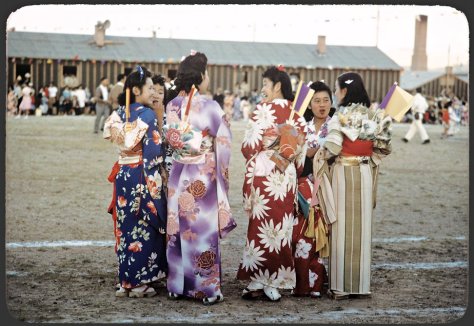 Bill Manbo’s Colors of Confinement is very different than anything I cover in my Born Free and Equal post. Where even Miyatake as an insider was taking photos as documentation of the camp itself, Manbo is just photographing his life. There’s no expected audience besides his own family and no goals beyond remembering.

The photos are a lot of fun. It’s a beautiful area and Manbo’s a technically competent photographer who’s able to work in low light with slow film* as well as frame things beyond just bulls-eying his subjects. Color is especially welcome. Given how popular colorizing old photos is it’s always nice to be reminded that color images do exist from the 1940s. Something about seeing things in color moves internment into the “color” era rather than the “black and white” era and even while I know better, I have to admit that there is something more accessible about these.

*Lots of sunrises and sunsets which, while obvious subjects, are not the easiest thing to shoot with ASA8 or ASA10 speed film.

What sets the book apart though are the essays. They’re all great but the most-interesting point is Jasmine Alinder’s assertion that the family snapshot is a human right. She reaches this point by describing why cameras were eventually allowed into the camps but the general point stands on its own. Despite the tendency of photography rights to get caught up in documentary evidence and whistleblowing, it’s vernacular photography which allows us to construct our sense of self.

This is much of the appeal of looking through old photo albums in general. There is a universality to images of kids playing and growing up; local celebrations and events; group photos just because everyone’s together. We see ourselves and recognize elements of our own lives in these photos. They aren’t art or journalism but while every family has very similar images, these are the first things to be saved in a disaster.

Manbo’s photos are a perfect example of this. He shows life and the good things going on just like most people’s photos do. There’s lots of fun and joy and the kind of memories everyone wants to have. The only difference here is that the setting is an internment camp.

The photos don’t deny or hide the setting. It is what it is—heck, there’s even some palpable anger present in some of the frames. But they humanize the inhabitants by showing how they live and how normal life is—despite the obvious abnormal nature of the situation—by presenting them in the same kinds of photos that we all have in our family albums.

The standard documentary approach typically involves casting the subjects as tragic figures. This is conventionally powerful and absolutely necessary, but the more I see it the more I find myself questioning our tendency to treat it as the most important point of view. It’s not exactly a trope, but it comes really close to that in how the subjects of the photos are only important in how their otherness can move the viewers emotionally.

Again, this isn’t to say that Dorothea Lange’s photos of internees are bad and that we shouldn’t see the suffering. But it’s important to be aware of the kinds of photos which are missing from most documentary photography. If you don’t see the photos of people living, kids growing up, normal everyday life, you’re not seeing the things that make them human like the rest of us. And that’s a bit of a problem.

Are the camps awful? At one level, absolutely.* At another. Not really. It’s clear looking at these photos why so many of the sansei kids who grew up in these camps don’t remember them as being bad. There was so much for them to do since the goal was to keep the kids busy.** Skating, sledding, sports, scouting, bands, etc. Kids had free reign in a safe environment and got to grow up in school and social environments where they weren’t minorities.

*Nor were they ever as great as Adams portrays them. Compared to Lange, Adams’s heroic photos are the other side of the coin in how they have very specific aims about how they want their white audience to react to what the non-white people depicted in the photos have gone through.

**And turn them into Americans.

Treating the camps as uniformly and undeniably awful does a disservice to the diversity of the experiences of the internees.* It’s weird to say you enjoyed the camps if you feel you’re supposed to have hated it and it robs you of your own agency and memory to have a forced narrative like that. Manbo’s photos directly challenge the standard narrative by showing all the fun parts of the camps in a non-PR way.

*Lon Kurashige’s essay in the book thoroughly covers this territory.

Where the WRA and the Ansel Adams photos emphasize “American” activities like scouting and baseball, Manbo shows other cultural aspects which didn’t fit that narrative but are as important and recognizable to Japanese Americans today. While I like the photos which demonstrate the traditionally American activities, the incompleteness of the picture frustrates me. Each time I go to Obon I see kids participating who are a fourth, or less, Japanese. But this is their culture and it’s a highlight of summer. It’s great to see photos of the beginning of new American traditions rather than getting only the prescriptive framing about what kinds of things are, or aren’t, American.

A selection of these photos came to Princeton for display in one of the dorm galleries. It’s nice to see big prints on the walls but I think I prefer these in book form. They’re more something I’d like to flip through and take in as an album rather than browsing through in a gallery. This might be an “art or not” distinction but it’s also related to how Manbo’s photos work better as a group rather than individual images.

One thing about the big prints that did catch my eye is that they’re printed with the black edge of the slide holder visible but cut off (much like the images on this webpage are). The book puts these images on black backgrounds so the presentation looks more like what a slideshow would look like.

I also caught much of the round table discussion about these photos. Not enough to provide a summary but I really liked Joshua Chambers-Letson’s talk about race as performance both from a double consciousness point of view and with the idea that Americana itself is a performance. This made a lot of sense in the context of al the internment photos since the tensions between being American and being foreign and being “loyal” and resisting what was being done to you course through everything here.

There’s also always the sense of oversight in the internment photos. Whether it’s oversight by the WRA censors or the camp management or the watchtowers looming in the background—or just out of frame of the images themselves. It’s not much a stretch to consider the oversight in photography now as we construct our own panopticons and continue to deal with racial issues in current society.