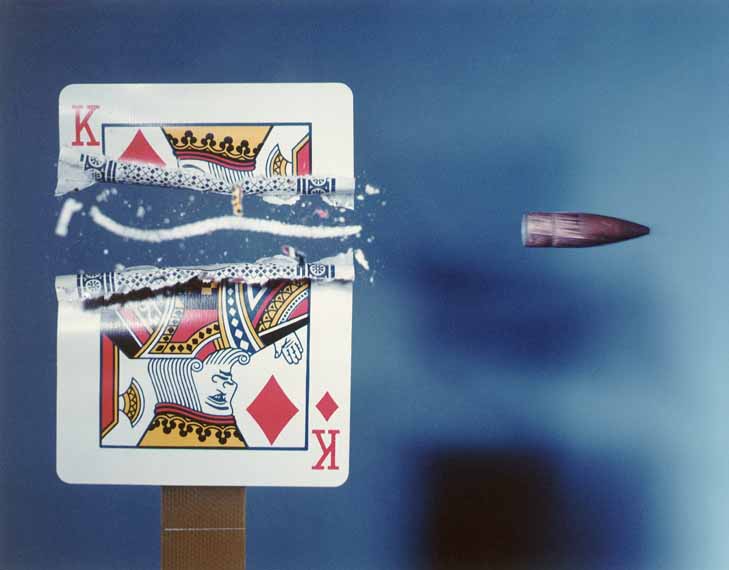 Nothing really new here. One of his photos came across Tumblr and reminded me of how often Doc Edgerton is on my mind nowadays. He’s one of those photographers whose name you’re supposed to know but, at the same time, feels like someone of technical rather than artistic importance. I’m not sure exactly where that line is but I’m pretty sure both Muybridge and Edgerton are straddling it.

In any case, he’s on my mind so much because every few months another photoseries goes viral* which is pretty much straight out of the Doc Edgerton handbook of using strobes to freeze action and capture the subject in a shape which we never see them in. I’m not knocking the concept. I’m just intrigued at how much interest it still holds.

Edgerton’s photos were pushing the limits of flash and strobes in their time. We didn’t know stuff like this could be done. Now? Besides the photoseries, we see these effects in sports broadcasts all the time. And they still fascinate us.

Part of me thinks this is because the frozen-in-motion effect helps us buy into the photography-as-truth thing in showing us things that are TRUE yet which we have never seen before.* This is still the goal that many photographers want to achieve.

*Even though it’s actually true that these ultra-short exposures are inherently unreal and nothing ever looks like these.

At the same time, I can’t help wondering how, despite the way we constantly get new viral series along these lines, this kind of thing doesn’t feel like art to me. Is it in the framing of the photos? So many of these are in the “look what happens when” camp where the content of the image is seemingly much more important than the photo itself. There’s obviously more to these photos than just the content but the framing suggests that we ignore that aspect. Or is it the fact that Edgerton’s work itself is held by MIT and feels more like evidence from science experiments rather an artist’s explorations.

I’ve no good answers yet here.

One thought on “Doc Edgerton”