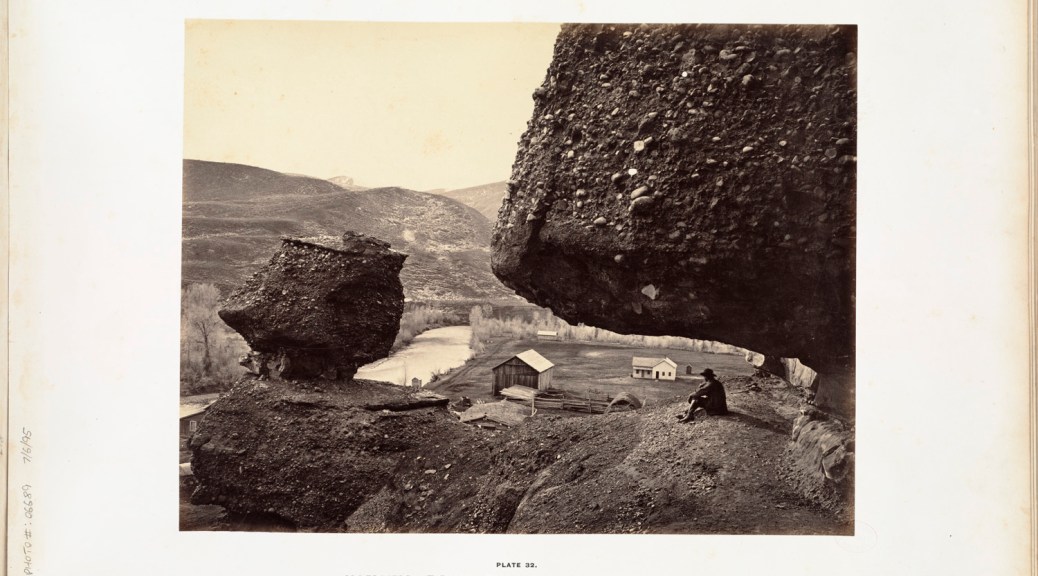 NOTE: This post is part of a post I originally published on NJWV. I’ve changed the beginning to focus on just the Russell photographs here.

I spent some family time at the California State Railroad Museum last month and managed to escape long enough to check out the special photography exhibition they had on display. While the rest of the exhibition was interesting,* the highlight was being able to look through a full-size reproduction of Andrew J. Russell’s Great West Illustrated. As someone whose favorite photobook may be Mark Ruwedel’s Westward the Course of Empire, looking through, in many ways, an identical project documenting the landscape around a railroad’s construction, rather than its ruins, was great and pointed out a lot of details that were lost by the time Ruwedel did his project.

*Sort of covered on my own blog.

Much of the geography of railroading involves cutting through the landscape in order to keep a track graded correctly. These scars are prominent in Ruwedel as they’re the most-permanent landscape modification from railroading. I was unaware that they had names and seeing each cut given a special name in Russell’s album, gives a a more personal sense of things.

It’s not just a scar on the landscape. The cuts reflect a lot of manpower and effort and each one is unique. We no longer see the uniqueness since we’re looking at the absence of the railroad rather than marveling at its presence.

Russell’s photos also include a number of references to coal beds and even a town called Coalville. This is something else that is easy to forget. Railroads are inherently tied to the natural resources they need to consume in order to run. Especially when building them in a place without any existing railroads for transport.

That the photos include a lot of the infrastructure required to support the railroads shows that it’s not just about the achievement of laying the track, this is about development and taming nature.

It’s this intersection of development and nature which really puts Russell’s photos into the tradition of people like Timothy O’Sullivan and Carleton Watkins who are credited with defining much of the way we view the American West. When Russell isn’t showing how the railroad infrastructure is conquering the landscape, he’s showing us photos of the incredible views and wide open spaces available for people to move into. This is a land of opportunity, a land of growth, a land of potential.

There’s also a completely different scale to the landscape in the West. Almost all of the photos include a human figure in the image. Some of this may be to hammer the “we’re here and can conquer this” point. But a lot of it is also just to provide scale. The landscape is huge.

But it’s settleable. Russell ends his journey in Salt Lake City with images that show a legitimate city nestled in the mountains. There’s also some curiosity about the Mormons, but it’s very clear that we can live in the West. And the railroads can take us there.

Besides the history side of things, I like a lot of the photos as photos even though all I had available to look at was a laminated digital print from a copy of the albumen print in the book. It’s not enough for him to just photograph the distinct landscape elements, I like his compositions and the way he’s able to situate so many of them in the landscape. I especially like the Hanging Rock photo and the way he’s used it to frame the settlement below it. Makes me wonder how much it would cost to buy a real print from the Oakland Museum.